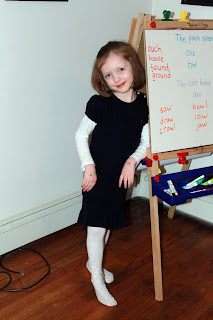 As we prepare to move we've been making the rounds to the various doctor's offices the 3 of us frequent (sadly there are quite a few!) to have final appointments and pick up medical records to hand carry with us to Nebraska. We learned during the last move that transfers of records from one doctor's office to another does not always happen in a timely manner and can really delay getting appointments with specialists. Today it was the Hannah's orthopedist we visited. Hannah was desperately hoping that Dr. Ehrlich would tell her that she didn't have to wear her Dennis Brown bar at night anymore, but such was not the case. Because it is actually working, thank heavens, she has at least 6 more months in it. She also has 6 more months at least in her AFOs and a warning that they will probably be a forever kind of thing. She WAS NOT happy about that, but I think she was even more upset about the bar. She has outgrown the shoes on her bar, but there are not any bigger sizes that can be ordered so we are going to have to slice off the front top part of the shoe and let her toes hang out over the sole a bit in ord 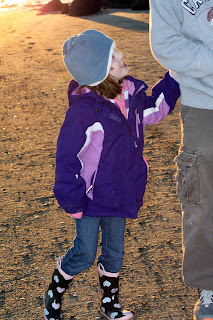 er to get 6 more months out of them! We also learned a little more about how the Ehlers Danlos is affecting Hannah. Apparently besides the extreme laxity in her ligaments and unstable joints, she has a deformity of her sternum that is causing it to collapse inward. Right now it's not causing any issues, but the doctor warned that it is likely to worsen with age and that we will need to monitor it closely to ensure that it doesn't push into any of her internal organs. Her knees and ankles showed improvement from their various interventions, but her hips have actually worsened. So, we are off to physical therapy to learn various exercises to strengthen certain muscles to help keep her hips where they ought to be instead of allowing them to rotate in compensation for the knee and ankle issues. UGH! We really don't need more appointments at the moment with the move coming up and another specialist to track down once we land in Nebraska, but we want to avoid su 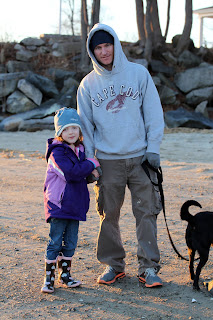 rgery down the road at all costs so we'll do what we have to do. So, that's pretty much it from the orthopedist. He was pleased about her progress, but not happy about the hips so those two things kinda cancelled each other out in his opinion. We'll miss him when we move because he is quite good. I'm hoping that Nebraska has some good medical professionals because we're coming soon and we need a lot of them!
Posted by Mama at 3:12 PM No comments: 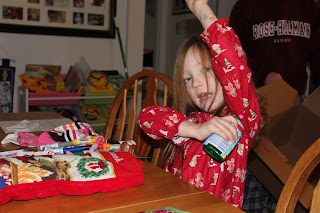 So, I've been avoiding you. . . . . . There's been so much going on that I've wanted to write about, but I haven't been able to post it to the blog so I've just not written anything. To write, but not mention the elephant in the room just felt like lying.
First off, when I last wrote we were going to check out the Christian school to see if it might be the right fit for Hannah for 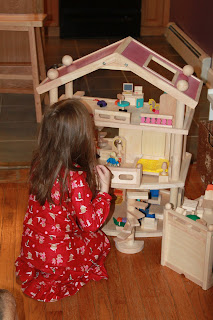 Kindergarten next year. The visit went great. We decided Hannah would attend there next year and in fact we decided she would start kindergarten right away (last month actually) and finish out the year in the kindergarten class and then move on with the class to first grade in the fall unless something unusual happened. BUT something unusual DID happen and she didn't start kindergarten and she won't be going there next year. More on that later.
Hannah's behavior has been all over the map the last two months, but mostly it's been rough-aggressive and angry. The biggest difference however is that her aggression has been controlled and deliberate 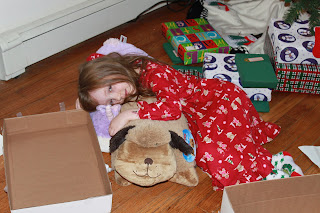 instead of wild and raging. The deliberate aggression almost scares me more than the raging because she KNOWS what she's doing and she is choosing to continue acting that way. Lately I've had more objects than I can count chucked at my head and the kicking, hitting, and scratching has been out of this world. Just as things started to ramp up in the behavior department we had a major stressor added to our lives and that of course has not helped the problems in the least. More on that later!
On a positive note, Hannah has been reading like crazy and has found another series she really likes, The Bailey School Kids. She actually read one of the books from beginning to end on her 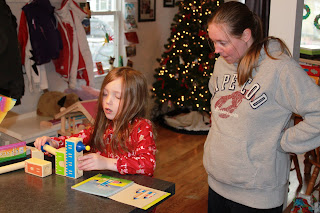 own in one sitting this week! She was that enthralled! Her comprehension is totally there too because she gave me an excellent summary of the book afterwords and when I skimmed through to check on her she was right on! She's pretty much mastered basic addition and subtraction and has started two digit addition without regrouping. We've been working with a hundreds chart and learning about the patterns within the numbers and she's been enjoying that. She's also been on a note writing kick. Every single day I get several little notes. At first they were just "To Mommy. Love, Hannah" but now they are more like, "Dear Mommy. I love you. I had a great time with you. Love, Hannah" They pretty much always say 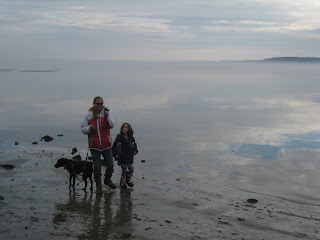 a variation on the same thing, but they are still sweet. She also loves to label all of her drawings and make us lists for things she wants us to buy at the grocery store. Kyle was on his way out the door one day when she called him back and quickly handed him a post-it note that said, "gum bagul." Translation: Gum, bagels.
Now back to that title. Hannah has two little friends whom she loves dearly. They are sisters and are so sweet to her. They handle her bossiness, forgive her when she's mean, and don't hold it against her when she has a major meltdown. They really are perfect for her. We play with them every Thursday after story time at the library and we've had 5 play dates outside of the library so Hannah is quite familiar with them and totally comfortable showing her true self. Anyway, Olivia, the oldest of the girls, is quite creative and sensitive. She loves to put on plays and write stories. Her favorite animal is the wolf, but she also likes fairies so she 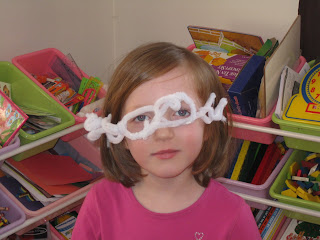 created an entire new species called "wairies." Wairies are wolf fairies. Not only is she writing a story about them, but they work themselves into most of her pretend play. Today the girls came over to play and I had to break up quite the unusual argument. From upstairs I heard screaming and when I went to investigate I was greeted by 3 girls all talking at the top of their voice. It turned out that there was a game going that included a wairy, a human, and a dog-specifically Bolt. Go figure! Apparently the "rules" of the game were that there was only one of each character and that they were taking turns being each of the characters, or at the very least both Hannah and Emmy wanted to be the dog. Hannah DID NOT want to give up being Bolt and was putting up a fight about it when it was Emmy's turn to be the dog. Hannah kept shouting, "There is only one dog and I want to be the dog!!!!" I tried to reason with her, as I always do in situations like this which are surprisingly common, that since this was all make believe she had two options. She could either change the rules of the game and there could be two dogs or she would have to let Emmy have her turn. Of course she didn't like either of the 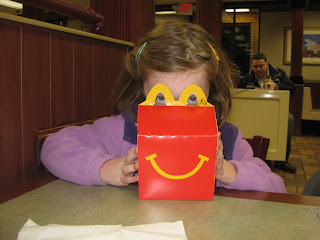 se options and continued to insist that there could ONLY be one dog. UGH! Eventually she screamed at me and stomped upstairs and slammed her door. Sweet little Emmy, who was so insistent that it was her turn to be a dog and who had rightly stood up for herself, was so sad that Hannah wasn't playing anymore that she ran up to her bedroom to say, "Hannah, Hannah! Come back. You can be Bolt. I'll be the human." It just about broke my heart. Such a sweet girl. I had to be the mean mom though and tell her that she had to be the dog though (at least for a little while) because it was her turn and we don't get our way in our house by throwing a tantrum and being rude to our guests. Eventually Hannah decided to rejoin the game and begrudgingly played the part of the human. 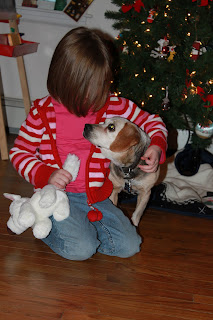 So, now that I've kept you hanging until the very end, here is why I haven't posted. We are moving sometime next month and it's a big move again. Kyle got a new job in Nebraska. Originally we thought we'd be moving this month so we opted not to have Hannah start kindergarten and then have to pull her two months later. Because of some mix-ups with medical testing, it's taken longer than expected to complete all the pre-employment paperwork so we'll be here a little longer than we originally thought, but it won't be much longer now. Hannah has been processing the move in spurts and I'm sure it's been contributing to her behavior. It seems like the public schools are much better in Nebraska than they are in Rhode Island which makes me very happy. I've spoken with the principals of a few of the elementary schools that would be in our home search area and I'm encouraged by what I heard. It seems as if they will be willing to work with us to set up something that will meet Hannah's needs. They've also all expressed an interest in meeting before the current school year is up to make sure everything is in place for next fall. Still, it will be starting all over again as far as Hannah's schooling goes which is frustrating since we thought we'd found the perfect place for her. Now we just have to find a house in order to know what school district we will be in so that we can get the ball rolling. 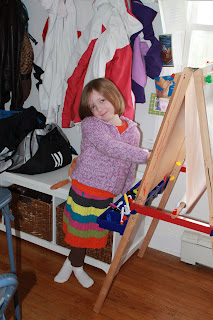 Though we don't have many friends here in Rhode Island, the friends we do have we are really going to be sad to move away from. They've made our stay so far from home much nicer. Hopefully we'll be able to make friends quickly once we get there for Hannah's sake.
Photo Notes: The first 4 pictures are from Christmas. I know it's March! Don't judge!! The first picture shows Hannah attempting to use the toothpaste Santa left in her stocking as deodorant! I guess it was an honest mistake as the tube is shaped more like a deodorant stick than a tube of toothpaste. The third picture is her snuggling her coveted pillow pets that she got from BOTH sets of grandparents. The fifth picture is the beach at the end of our street last month. The ocean is definitely something we'll miss about Rhode Island. The sixth and seventh pictures show the goofy side of my girl. She made a pair of glasses for herself out of pipe cleaners and then decided to use her happy meal box as glasses as well! The 8th picture was from our good-bye photo shoot we did before Abby died. The last picture high lights Hannah's unique 4 yr old little girl fashion sense!
Posted by Mama at 9:08 PM 2 comments: