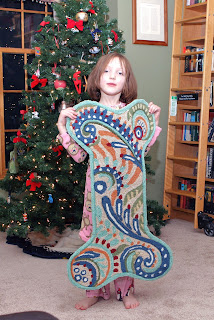 We have been having a lot of trouble keeping Hannah from sneaking out of her room when she is supposed to be sleeping and getting into things she is not supposed to or stealing things like money or candy. Last night/this morning she took it up a notch and what we had feared would happen happened. Instead of sneaking off with my Ipod or computer or stealing candy, last night she got into a cabinet locked with a child lock, opened a childproofed lid on a bottle and ate close to a 1/4 of a bottle of Flintstones gummy vitamins as well as several candy bars from my Christmas candy stash. Thankfully poison control was able to reassure us that since the vitamins did not contain iron, the worst she would probably fare was an upset tummy or some diarrhea. While I am glad that she's fine, I do kinda wish that she had at least gotten an stomach ache to impress upon her the seriousness of her actions. For the longest time, our way of dealing with both Hannah's rages and her sneaking things/eloping was a reversed door knob with the lock on the outside of the door so that it opened when we turned the knob on the outside, but she could not get out on her own. When we started the process of becoming licensed foster care parents we were force to abandon that measure of safety we had come to depend on. Because of the potential for abuse it was just not allowed even if we weren't using it on a foster child. We considered then buying a door alarm then, but just didn't follow through. I guess we thought she'd "grow out of it" or something. I mean, seriously, what 5 year old needs to be locked into her room at night? Last night however, Hannah proved that she is just too smart and has too little self control fo 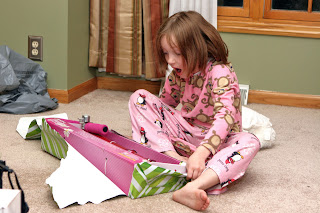 r us to do nothing. We must keep her safe and child safe cabinet locks and manufacture childsafe bottles just don't cut it anymore. We even have medicine safes for the scarier meds, that are also kept inside a childproofed cabinet, but I'm worried she'll figure out how to get those open too. So today I went and ordered a door alarm. We MUST know when she leaves her room. She's just too stealthy without it. It's not like we sleep like rocks, but this kid is SNEAKY! It will be interesting to see how the practical aspects of having a door alarm work with also having a sleeping toddler in the house. It could lead to some sleepless nights for all concerned, but its much better than the alternative of an overdosed kid.
And, as if that wasn't enough drama for the day. As soon as I picked Hannah up from school she began melting down. She was angry about having to complete her job card before she could have a snack. After exiting the van (I can at least be thankful that she waited until we were out of the vehicle) the hour and a half long rage began. I had my first big test as a new mama of 2 attempting to deal with the rage, keep the toddler safe and his needs met, and manage the new 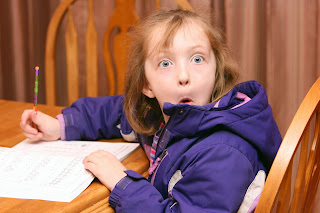 behavior plan and holds when she got aggressive all at the same time. When Kyle finally arrived home I was soaked with sweat and exhausted and had 2 cranky children on my hands. I think I must have jinxed myself with my last post bragging about how well the first week was going.
It's funny how whenever we have good stretches of
behavior I start to doubt that there's really a problem. I think maybe I was just over reacting like so many people have suggested in the past. Then the rages hit and I remember WHY we are headed to that severe behavior clinic in a week and a half. We may have lulls in the storm, but the hurricane is still there.
Posted by Mama at 8:53 PM No comments:

You would have thought with as crazy as our week as been, adding a new member and all, that Hannah would have completely melted down either at home (most likely) or at school. Surprisingly that has not happened!  She's had a wonderful week by our standards and amazing if you consider she went from only child to big sister with very little warning.  Even her teacher has reported very good days this week.  I suspect that this is simply the honeymoon period from our big change, but I'll take it whatever the reason. What I'm nervous about is that Kyle is going to Germany next week and now instead of being a pseudo single mom of one school aged kid for a week I'm going to be a single mom to two kids, one of whom is a toddler for a week!  Let's hope I'm up for the strain!
Hannah continues to enjoy her swim lessons.  She's getting more and more comfortable in the water. It seems her skills progress may have slowed or stalled a bit here recently, but I still think she's doing very well. At the end of the last session they moved her up a level and this new teacher is having a difficult time actually teaching her class since she has 7 kids and no help. She has to spend the majority of her time just making sure they are safe and that leaves little time for actual one on one instruction with the kids on their strokes. I think I may speak to the front desk about it and strongly suggest they get a helper for the class.  If they aren't willing to get assistants for the classes then they need to place smaller limits on the number of students that can be enrolled in each class.  7  K-2 aged kids is just too many students for a high school kid to control in the water.
Posted by Mama at 10:54 PM No comments: Big changes have happened since I last wrote. We've headed back to school. Hannah got ANOTHER office referral at school. We finally got our evaluation date scheduled for the severe behavior clinic. We got Hannah's newest set of diagnoses (ADHD and Oppositional Defiance Disorder, Aspergers is still waiting to be ruled out or in by the severe behavior clinic) We started a new behavior plan with the help of the current psychologist. Our foster care license finally cleared AND we got our first placement! That's A LOT to happen in 2 1/2 weeks! 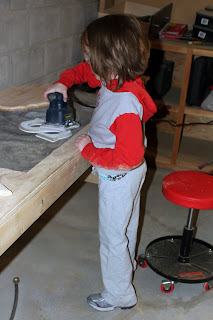 can't really talk about our lives with those kids and how that relates to Hannah and our lives on this blog anymore since it's totally not private. I'm going to continue to write on here about day to day stuff and Hannah, but I will also start up an anonymous blog where I can chronicle our foster care journey. If you are at all interested in reading that blog please leave me your email address in a comment and I'll email you the address to the new blog since I don't want to post it on this blog and have the two connected and the wrong pe 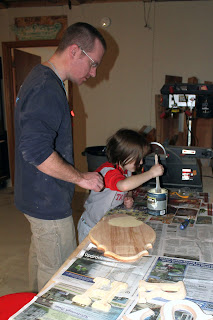 ople find out who we are in the new blog.

Ok, back to Hannah. Hannah's new behavior plan is interesting. It's too soon now to tell if will do any good, but one thing is certain. . . . she DOES NOT like it. It is essentially a psuedo grounding of all privileges where a chore is given as a consequence that has to be completed before the grounding is lifted. Basically she chooses how long the grounding lasts by how quickly she decides to get the chore done. There's also a positive reinforcement piece to it as well where she earns small rewards (special time with mom or dad, tv time, computer time, etc) randomly for being obedient. Along with this new system (which the psych calls the Job Card System), we were also taught a safe hold to use when she becomes aggressive which has been happening more and more lately and had become increasingly difficult to manage because she is getting so big and so strong. I don't like the thought of having to use restraint in any form, but I have to admit the few times I've had to use it everyone has been a lot safer. We'll keep everyone posted 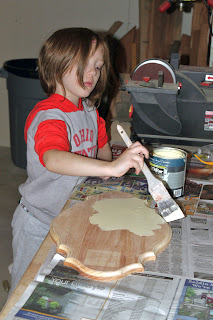 as things continue along. I'm sure things will get even more rocky before they get smoother especially considering the big changes that have happened in the house.
Photo Notes: These pictures were from a Daddy-Daughter project that Kyle and Hannah are working on for her room. It's still not finished yet, but hopefully soon it'll be done and up on the wall. I'll be sure to post a picture of the finished product when they get it done.

Cats Land on Their Feet! 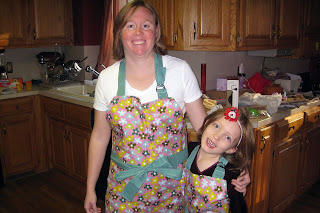 Thankfully cats usually land on their feet. This was especially lucky for poor Thunder (Hannah's kitten) today because Hannah decided to toss him out of a window. He fell 12 feet down to the ground and hit a concrete patio. Not only did she make this interesting decision, but she chose not to tell anyone about it until 6 hours later when it was time to go to bed. Poor Kyle had to go searching for a BLACK cat in pitch dark. Thankfully Thunder was found, interestingly enough right where he was dropped, and does not appear to be hurt although he has been quite needy ever since being brought back into the house. Thankfully for us, Hannah did not fall out the window in her attempts which could have easily happened as I'm sure the cat DID NOT g 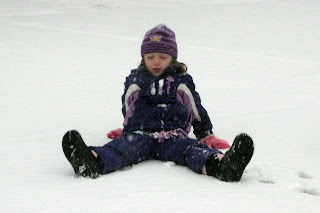 o willingly out the window!

Truly it seems as if there is never a dull moment around here. I can only imagine what it will be like once we have more kids running around that Hannah can con into joining in her antics! Still, I really want to get more kids into the house. Peer models, even if they aren't completely typical, have got to be a good thing for her!

Surgery went well and for once there were no post op complications at all! YAHOO! The rest of the day after surgery was nerve wracking however because Hannah is one of those kids who gets uber hyper instead of lethargic when she's not feeling 100% and the post op instructions were to keep her quiet and no running, jumping, or climbing. UM, YEAH. . . . . We failed ALL of those post op instructions within the first hour home! I'd just like to see that doctor try to keep a wired off of anesthesia 5 yr old still. Trust me, it's not happening with my kid. 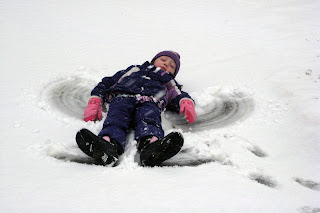 Hannah goes back to school on Thursday and for me it can't come soon enough. This break, without the structure of school, has been hard on us all. In fact, Hannah even went as far as to write a "run away" note to Kyle and I. Thankfully she hand delivered it so there was no chance for her to put her plans into action! Apparently she was planning on going to Indiana to live with Mamaw and Papaw! Speaking of notes, notes abound here recently. Hannah writes notes about EVERYTHING. She writes me notes to ask me questions, to pseudo apologize, to announce run away plans, etc. I think I'm going to start taking pictures of each of them so that I'll always have a record of them. The run away note seems to have disappeared and that makes me sad. It was my favorite! :)
Posted by Mama at 10:10 PM 2 comments: