While I've often complained that the airline industry took security as far as what was and was not allowed onto a plane a bit far in the post 9/11 aftermath, I now believe they were completely justified in banning toenail clippers from carry-on baggage. They can (and have now been used in my house) be used as a terrorist device. Confused? Remember this post? Apparently I should have been more specific in my post "beautification" lecture. Instead of stressing that she should NEVER cut HER hair with SCISSORS, I SHOULD have hammered into her little brain that she should NEVER EVER EVER attempt to cut ANYONE'S hair with ANYTHING. Are things becoming clearer now? Ready for the full story? Lately I've been even more exhausted than usual so Hannah has been allowed to come into our bedroom when she wakes up and watch PBS until I'm coherent enough to tackle the day. This morning I was struggling more than usual with getting myself moving so apparently Hannah tired of TV and decided to make her own fun. I felt her climbing around me, but didn't think too much of it. Then it felt like something pulled my hair. I opened my eyes to find toenail clippers poised less than an inch from my eye being wielded by a newly turned 3 year old! I was so startled I bolted upright and nearly knocked Hannah off the bed. Once I recovered I asked her what she was doing. She calmly replied, "I'm cutting your hair, Mommy." Seriously, do other people's kids do this or am I the only lucky one?

Lately I've been doing battle with the local school system (while simultaneously researching private preschools in case I lose) since they have deemed Hannah too high functioning to qualify for their preschool unless she scores poorly on their language pragmatics test they want to perform next week. The problem I have with this is that only one person on the eligibility team has seen Hannah in the environment that gives her so much trouble. Not only that, but the observation lasted only 30 minutes and was during a highly structured group circle time that required little to no peer interaction of Hannah. When I discussed my concerns that although Hannah is highly capable of using advanced language, she is unable to do so with peers even when she is distressed and wants a child to leave her alone and the only word she need utter is "NO" in order for a teacher to intervene and her therapists reiterated this concern many times over, the eligibility team assured me that if there really was a problem then it would show up on the language pragmatics test they intend to administer. Um, I'm not a speech pathologist, but I DO know my daughter and I'm positive that she'll ace whatever language test they give her if it's administered one on one by an adult. It's not that Hannah doesn't understand HOW to use language. Her problem is the practical aspect of using that language effectively (or at all) with peers or often even with adults when she's in a socially overwhelming social environment. Whether they choose to believe it or not, those who really know Hannah know this is a problem. Though the defender of justice in me wants to make them provide her with what I firmly believe that by law she is entitled to, I'm growing weary of this fight and I'm not altogether convinced that this classroom (taught by the person who observed her for 30 minutes and proclaimed to know all about her) will be the best place for her. I'm not sure that this particular teacher will be able (or possibly willing to after all the fight I've put up) to meet her needs IEP or no IEP. I've found a private preschool near our home (recommended by her speech therapist) that seems like it would be a perfect fit. It's fully inclusional, has OTs, PTs, SLPs, and a nurse on staff, and is taught by the teacher that USED to have the job of the lady who observed Hannah and who would teach her class should she qualify and attend the school system's program.

As Hannah becomes more and more willing to and interested in interacting with other kids I've begun to notice a troubling pattern. Take today for example. Hannah and I walked down to the beach to play in the sand. Shortly after we arrived a father and his two daughters (aged 4 and 5) showed up to swim. They tirelessly engaged with Hannah until they finally broke through her defenses (aided I'm sure by all the sensory input the ocean provided!). All of a sudden Hannah was playing happily with the girls. As she became more comfortable with the girls she swung 180 degrees from refusing to interact to completely being in their faces and just generally being too close and not respecting their personal space. It wasn't long before the girls who had been actively trying to get Hannah to play with them were now trying to get away from her and Hannah was clueless as to the change of events. I felt so bad for her. She really thought they were all having fun. I tried to remind her to give them space, to not shout in their faces, to keep her hands to herself, but she just couldn't understand. They wanted to play with her. They were being nice to her. Why shouldn't she play with them in the only way she knows how? I see this pattern happening over and over again. Nearly every time Hannah manages to break out of her anxiety and make an initial connection with another child, it almost always begins to go south as she becomes more comfortable and attaches herself at the hip to the other child. Right now she doesn't get it that these other kids don't want to play with her anymore, but what I'm worried about is that if we can't teach her how to sustain the initial positive interaction she will eventually begin to notice that kids don't want to play with her and be hurt by it. I just don't want to see that happen to my little girl. What I don't know is how to teach her how to do it and how long I have before she starts to notice when the kids don't want to be around her. So, for all you veteran parents out there, how old are kids usually before they start to notice what other kids think about them?

Toilet paper just may be my undoing. It really and truly may drive me into the loony bin. Every kid plays with the toilet paper roll at one point or another, or so I've heard, but Hannah seems to have taken it a step farther. For the past few months she has become obsessed with toilet paper, but she's not just randomly unrolling the roll. Instead, she's tearing off pieces, sometimes little and sometimes big, and shoving them inside things, usually bodily orifices. So far I've found toilet paper stuffed inside the fins of the radiator in the bathroom, inside the faucet, between the tube and the rod that holds the toilet paper to the wall, between her toes, inside her ears, in her mouth, between her labia, between her butt cheeks, large wads inside her underwear, shoved in the toes of her shoes, under her arm pits, and most recently 4 tiny balls shoved deeply inside each nostril.

In other news, we had house guests last weekend for Hannah's birthday party. My mom, sister, and cousin all flew in from Indiana. Hannah was in her glory with 3 extra adults to dote on her. She was completely exhausted by the end of the weekend though! They brought Hannah tons of princess/ballerina paraphernalia, her favorite of which was fingernail polish. Hannah absolutely adores having her nails painted, but I don't own any nail polish. The cutest part of the whole scenario is that for some reason she can't say toenail polish. Instead, she says paw nailish. How precious is that!?!

Leading up to my family's visit Hannah felt the need to go over and over family relationships. She wanted to know how each person related to both her and me, for example Heather is my sister, but her aunt. Mom is my mother, but her grandmother. Today she started back in on the family relationships. When we got to my sister, Hannah stated that when she was bigger she would be a sister too. I explained that she was already a sister to Kayla and Chase (Tiffany's twins). Then she noted that when my friend Sarah has her baby her friend Evelyn will be a big sister. Sensing she was getting it I said, "That's right!" Then she proved me wrong by stating very matter-of-factly, "Now I'm a little sister because I'm little, but I'm growing now and when I'm grown I'll be big and I'll be a big sister then." It's hard to argue with that kind of logic!

My Baby is Three! 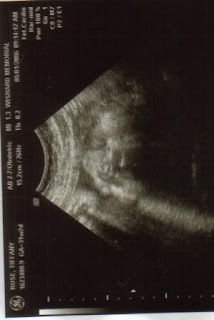 It's amazing how quickly three years have gone. It seems like just yesterday Kyle and I made the decision to start the adoption process and now here we are parents of a 3 year old! The past 3 years have held more joy than I ever could have imagined my entire life containing. I feel so blessed to be chosen by God and by Hannah's birthparents to parent this amazing little girl. What a wild ride it's been! I can only imagine what the next 3 years have in store for us. I'm too tired to post much tonight, but for now enjoy these carefully chosen photos of my beautiful little girl. 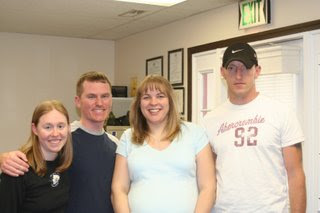 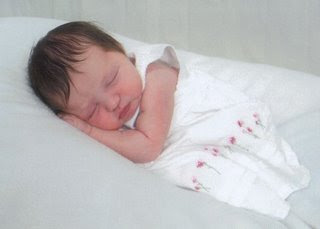 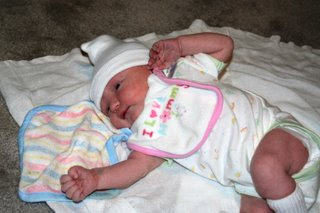