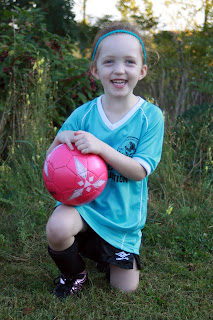 Seriously, what on earth happened to October? I feel like I went to sleep one day and when I woke up, "BAM!" October had mysteriously vanished and we were well on our way into November. So, just to prove to myself that October did indeed happen, here's a recap of our month.
Hannah played soccer the whole month although we really must use that term loosely. It's more like she whined and complained about soccer the whole month, but refused to actually quit. Soccer is now over and we can all breathe a huge sigh of relief that we will never make that mistake again! (She sure did love her uniform though!)
The first week of the month my dad came to visit and we carted him around the whole week to all of Hannah's appointments and classes. He got to go grocery shopping, to the dentist, to OT, to soccer, to the doctor, to the museum, to a zoo class and to an animal class at the YMCA. The poor guy didn't get to do ANYTHING touristy or restful! The day my dad left, Kyle's brother and his fiance arrived for 4 days with their dog/small horse. Hannah loved Kahlua even though she outweighed her by close to 100 pounds! While our guests were here 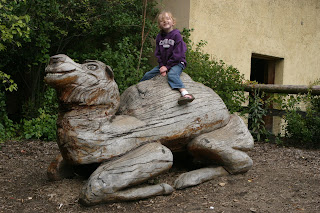 I managed to come down with an awful cough that decided to hang out for ALL of October (more about that later).
Eventually, all of our guests were gone and we dove head first into homeschool and unburrying the house after two straight weeks of house guests. Homeschooling has been going well and Hannah's flying right along with the curriculum we've chosen as well as all the extra stuff we've picked out to supplement the work and to get her social experiences.
My cough continued to build until finally one Sunday I woke up and just could not get out of bed. On top of my cough I ached all over, had a fever, and my neck was so stiff I could barely move it. The next day I tried to get a doctor's appointment, but my doctor was completely booked so I attempted to go about my business, but just could not do it. I eventually decided that I had to be seen that day and called the doctor to ask whether she thought I needed to go to urgent care or to the ER. Apparently that got her attention and they told me to come in right at closing time and they'd squeeze me in. Shortly after lo 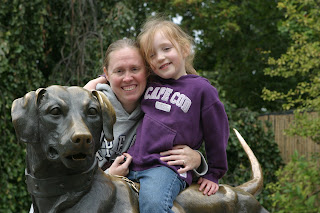 oking at me, the decision was made that I needed to go to the ER because she feared that I either had septicemia or meningitis. I knew I could not effectively control Hannah in the ER while I was being checked over so I called a friend to see if I could drop her off there for a few hours until Kyle would be home from work and she instead insisted on coming to pick both Hannah and I up and drove me to the ER and took Hannah back to her house. Hannah ended up staying with them for two days because I ended up being admitted to the hospital. They too suspected meningitis, but were unable to do a lumbar puncture on me. The resident tried twice and then called in the attending physician who also tried twice with no success. Apparently my vertebrae are too close together to pass a needle between them. Good thing I've never given birth because I would have been seriously ticked to have been in labor expecting an epidural and be told they couldn't do it because they were unable to get the needle in there! Fortunately it was determined that I did not in fact have meningitis, but instead a nasty case of bronchitis and a viral infection that had piggy-backed along on top of it. Since I take immune suppressant drugs for my autoimmune disease, my body was unable to fight off the two simultaneous infections and had become basically overwhelmed. They stopped my medication, pumped me full of fluids and multiple IV antibiotics and then sent me home. Since coming home I've been on bed rest for several days (although I had a hard time following those orders) and now I'm back on light duty. I'm feeling much better, but I'm not 100% yet. The bronchitis is still hanging on and I tire very quickly. Hopefully I'll kick it soon. 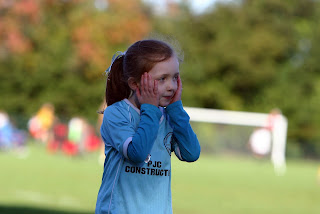 In the midst of all of this sickness, soccer, and visitors I also managed to make my first ever Halloween costume. Hannah is obsessed with the movie Bolt and desperately wanted to be Bolt for Halloween. Unfortunately the Disney Store doesn't sell a Bolt costume so I was left with the decision of telling her to pick something else (not something I wanted to do) or make it myself. My mother is a brilliant crafter and my sister and I always had fantastic hand made Halloween costumes (we were those kids who always won the costume contests at all the fall festivals!), but I DID NOT inherit her talent for sewing or ANY of her crafty genes. Much blood, sweat, and tears went into the making of that darn costume, but I got it done. I also learned the hard way that the words on the back of a bottle of fabric glue are LIES! ALL LIES! Just in case you ever decide to pick up a bottle and want to believe their claims that it permanently bonds two pieces of fabric together. But I digress, Hannah loved it! I thought it wasn't too bad for my first try, however on Halloween night she received many comments along the lines of, "Oh, what a cute bunny!" By the end of the night she had grown pretty testy about it and was snipping back at them, "I'm not a rabbit I'm a dog! I'm 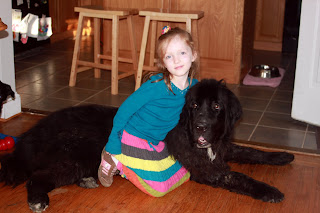 Bolt" despite my repeated lectures about being polite. ~Sigh~
We also made a big decision in October. We decided that after the first of the year we will officially jump back into the adoption process. We are very excited about it and Hannah is already asking regularly when her new brother or sister is coming. It's hard to get a 4 year old to understand the concept of waiting a year or more to get through all the paperwork and matching process. This time instead of doing a private agency adoption for an infant we plan on going through the foster care system and adopting an older child. Now, when I say older child, we are still planning on the child being younger than Hannah, but not necessarily an infant. Although you never know how God will work. We could find our selves welcoming an infant or a teenager instead of a toddler into our house. You just never can tell. We know God will point us in the right direction though.
Posted by Mama at 6:02 PM