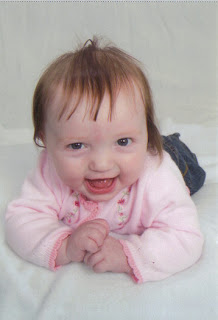 Hannah continues to amaze me everyday. Recently I started giving her a sippy cup about a 1/4 filled with water to play with each time I feed her cereal. Before I give it to her I tell her this is her cup and I say, "Mommy can drink from Hannah's cup. Can Hannah drink from Hannah's cup?" and then I show her how to drink from the cup. Usually she just chews on the spout when I put it up to her mouth and then pulls the cup out of my hands and plays with it for awhile, but yesterday she watched me intently as I drank from the cup. Then, when I put it up to her mouth she latched on and started gulping down the water! It happened just like that! She had an eureka moment and now she's got it down pat. She 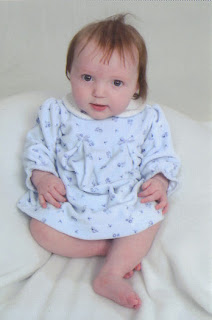 thinks drinking the water is pretty cool although she can't manage to hold the cup herself yet and still drink the water, but I still think it's pretty cool that she learned how to drink from the cup so quickly.

Another update is that Hannah is down to only 4 bottles a day. She takes 4 7 ounce bottles and has now successfully moved to 4 hours in between each bottle. She has also been eating 2-3 tablespoons of cereal twice a day. So far she has tried rice, oatmeal, and rice with 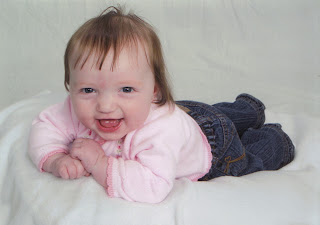 apples. I think she likes the rice with apples the best and I can't say that I blame her.

Hannah has also recently started developing a sense of humor. She will now laugh whenever we do something funny like make a funny face or talk in a weird voice. It's like she finally gets jokes now. It's awfully cute to see her laughing hysterically over mom saying silly things. It makes me laugh when she gets going and then that just makes her laugh

This weekend starts Hannah's holiday engagements. She has 3 Christmas get togethers this weekend and 3 next weekend (one of which lasts all day!). I have a feeling she's going to be spoiled rotten by all the attention before it's all over.

Hannah got her first cold on Wednesday and it's still hanging on. She's really stuffy in her nose and her chest sounds all congested too. She's been pretty lethargic and fussy and of course she's very tired but refuses to sleep. On Wednesday she did take a 2 hour nap which has NEVER happened before. I kept going in and checking on her after a 1/2 hour b/c I was worried since it was so atypical for her.

Hannah also continues to resist going to bed at night and naps in general. She's been throwing huge fits every time we try to put her to bed. It's quite frustrating because we really don't know what to do about it. I have no idea why she's started this new habit of hers and I must say I don't like it. I miss the good old days where she put herself to sleep each night. 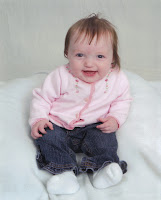 Yesterday the adoption agency called and asked us if it would be ok if they ran a story about Hannah's adoption in the Associated Press! I was thrilled of course and said yes. They said they would let us know when it was going to be published so that we could get a copy of it. I think it's pretty cool and can't wait to see what they write about Hannah. :)

Well, I think that's about all the Hannah updates for now. Hannah is still feeling really crummy and is not liking me being on the computer so I had better go and cuddle her some more.
PS. The pictures you see are Hannah's 4 month pictures. Now that she's 5 months old I've finally got around to scanning in and posting the 4 month pictures!
Posted by Mama at 2:01 PM