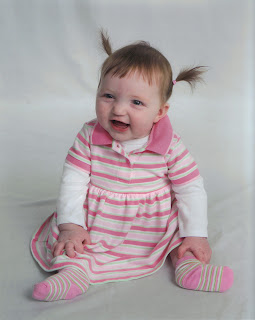 Before Hannah was born there were two things I said I'd never do. The first was drive a minivan. We all know how that turned out. The second was get rid of my long hair. Well, Hannah had other ideas about my long hair and decided it was great fun to pull mommy's hair out by the roots. She's quite the strong little girl and extremely quick so, besides being in considerable pain, my head of hair was quickly thinning anyway. So, I decided to just get over it and cut my hair. It's not nearly as short as say Heather's hair is,

but it's quite short for me. I think I like it and Kyle says he really likes it AND the best part is that it's much harder for Hannah to get her little fingers around.

As far as Hannah updates go, Hannah's sleep struggles have continued even though I haven't mentioned them much lately. Finally on Monday I decided enough was enough. So, I decided to Ferberize her. I'm not sure if that's how you spell it, but it's the name of a doctor who developed this method of 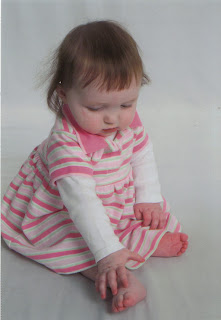 teaching babies 6 months and older to put themselves to sleep. His method is pretty simple although it's easier said than done. He says that you should start with 5 minutes (or whatever you can tolerate and for me it's 3 minutes to start!) of letting the baby cry before you go in to soothe them. You are supposed to calm them by talking to them, patting them on the back, pretty much anything except picking them up out of their crib. Then, you leave before they go back to sleep. When and if the crying starts again you stay out of the room longer this time. I jump up to 5 minutes the second time. Then you go back in and repeat the process of calming. You continue these cycles over and over making the time you wait before going back into the nursery longer 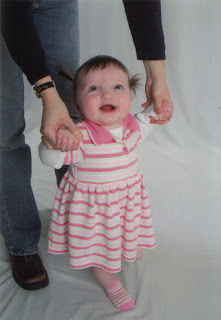 and longer until the baby finally falls asleep. Let me just say that it about broke my heart to do it to Hannah, but I knew it had to be done so I toughed it out. I had to do it again Thursday morning when Hannah woke up at 5:00am and refused to go back to sleep. On Monday night it took a little more than 2 hours of hysterical crying for Hannah to eventually fall asleep. Yesterday morning it took just over 1 1/2 hours. Hopefully this

means we are making progress. It is SO HARD for me to hear her crying, know that I can immediately make it stop just by going into her room and rocking her, and not go into the room. Keep your fingers crossed that I can hold up in this battle and that soon we will have a peacefully sleeping baby.

I've finally got Hannah's six month pictures scanned and I must say that I think these are the cutest photo shoot yet. Our photographer at JC Penny's, Melissa, is amazing. I don't know how she does it, but she definitely has a way with babies and can get the very best out of 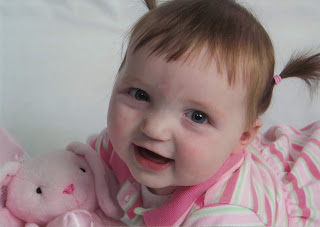 Hannah is getting quite good at feeding herself the veggie puffs. It's pretty funny to watch her though. She chases the puff around her highchair tray and then pens it up against a side. Then she picks it up with moist fingers and it sticks to her finger and

I too got a mini-van and have been considering cutting my hair quite a bit for the same reason but haven't done it yet. When are we going to see a picture of your new 'do'?

Hi Natalie. Hang in there with trying to get Hannah to soothe herself. I know it isn't easy but it is totally worth it! I hadn't heard a name for this process until your post but all of my baby books and magazines say to start with it right away so Sarah has already been taught to soothe herself. She still has times that she cries for a while but for the most part we just put her down when she starts getting sleepy and she does the rest. Hannah is so beautiful and I love her little pigtails in her 6 month pictures. I can't wait to see your new do! Take care!