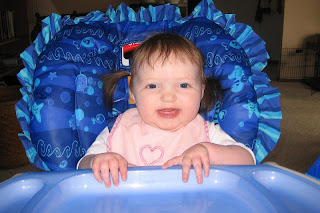 Hannah has really become a little explorer as of late. She's finding all manner of ways to get around and she uses each method as needed to get where she wants to go. Her favorite places to go right now are under her swing, under the coffee table, up against the entertainment center, and up against the basket of blankets. She LOVES to get up against something and then kick it tirelessly. She's also been attempting to pull herself up on the coffee table and the basket 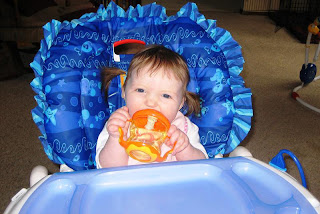 of blankets. She has yet to be successful at this new milestone, but we all know how relentless she can be when she sets goals for herself. She also loves to crawl and roll all over Kyle and I as well as the couches and chairs in the house. It's so funny to see her climbing over things to get what she wants which is usually a lamp, remote control, or the telephone!

The last few days she has been VERY cranky. Her teeth are really bothering her. I'm not sure if

it's her newest tooth that's still causing pain or if I should expect yet another new tooth sometime in the near future. She's drooling like crazy again and chewing on EVERYTHING in sight. Whenever I give her one of her teethers from the fridge and she first puts it in her mouth she gets this look of ecstasy on her face like she's saying, "YES! This is heaven." Kyle said Tuesday night when he gave her one she went from fussing to laughing hysterically as soon as he gave it to her. At times it's like we have a miniature Dr. Jekyll-Mrs. Hyde on our hands. One minute she is happy as a clam and the next minute she is SCREAMING bloody murder. It's so hard to know that she is hurting and to not be able to do a whole lot to ease her pain.
Her sleep problems seem to be evening out for the moment. She's getting much better at soothing herself and that makes me happy. It's so hard for me to hear her cry and just let her keep crying when I know that if I just picked her up and rocked her I could have her comforted and back asleep in under 5 minutes. I know she has to learn how to do this for herself or she'll end up being that 7 year old that won't go to sleep by herself and has to sleep with mom and dad. I want to do what's right for her long term, but it's hard.

Hannah's become an obsessive stander and eater of veggie puffs. I truly believe that she is addicted to both of these activities! She will grab and pull on the handle of the basket over and over and over, but she's just not quite strong enough to get herself up because the handle has too much give and it's a bit high up for her to really get a good grip on it. Or she will pull at my hands and slap me and make all sorts of noises if I'm not paying close enough attention to her until I let her use my thumbs to pull herself up. If I make her sit back down she cries and starts reaching for my hands again until she can pull herself back up. She's starting to get adventurous about it too. She'll let go of my hands with one and sometimes both hands. Today she actually balanced herself without holding onto anything for about 3 seconds before she started to topple over. She also started trying to pull herself up on the crib railing today. She rolled herself up next to the crib and grabbed and pulled with all her might. She just wasn't quite strong enough to get herself up at the angle she was at. As far as the veggie puffs go, she swipes them up as soon as we put them on the tray of her highchair and as soon as it's gone she's looking for more. I have a feeling that it won't be long before she's using the "more" sign to tell me she wants more of the beloved veggie puffs!
Notice in the last bath picture how long her hair is getting! It's down between her shoulder blades now! I can even manage to get it into a single ponytail in the back if she holds still long enough!
The purple shirt Hannah is wearing in these last few pictures is a Christmas present from our friend Marisa. She gave Hannah and I matching Life is Good daisy shirts! We love them and I can't wait until it gets warm enough for us to both wear them out together! We'll look so cute! Well, at least Hannah will. :)