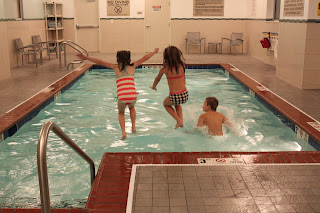 I don't often blog about adoption anymore since our experiences with adoption just seem like "life" now. We are living an adoption and it's hard to separate the two sometimes. However, on our trip back to Indiana a few weeks ago we unexpectedly got to meet up with Hannah's birth mom, Tiffany, and Hannah's brother and sister. It had been a long day and night, but it seemed so important to see them that I threw all semblance of routine to the wind and we went swimming at 9:30pm (already 2 1/2 hours past Hannah's bedtime!). The kids had a blast and it was so neat to see them truly behaving like siblings. That blood bond is strong no matter what others may try to say. You can't just forget it. It's as important (if not more so) for Hannah to se 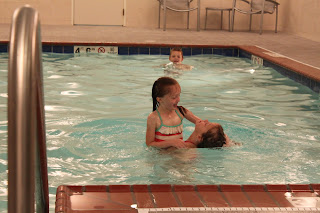 e Kayla and Chase as it is for her to see Tiffany and it's important for the twins to see Hannah too. Because Tiffany has always been open and honest with them they KNOW Hannah is their sister and they proudly claim her. In fact, Tiffany shared with me a story about an interaction between Kayla and one of their neighbors. Apparently the topic of siblings had come up somehow and Kayla mentioned that she had a sister. The neighbor lady corrected and 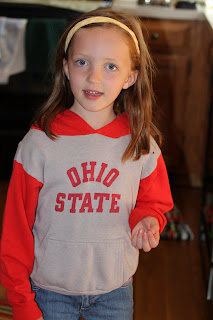 argued with her as Kayla continued to insist that she DID have a sister and her name was Hannah. Kayla explained to the woman the best she could about how Hannah didn't live with them and about the adoption. The woman just couldn't get it and never did believe her. Finally Kayla gave up and said, "Forget it! It's complicated!" It warmed my heart to have affirmation that my little girl has people who claim her, who want her, who simply take for granted that she's theirs. I know that open adoptions are often tricky to navigate, but there's one thing I KNOW for certain is that my little girl will always have her village of people who love and care for her, be they her birth or adoptive family, she'll have them.

Photo Notes: The first two pictures are of Hannah and her siblings swimming at the hotel pool during our most recent visit. The last picture is just a fun one of Hannah sporting one of Kyle's old Ohio State sweatshirts from when he was a kid.
Posted by Mama at 10:22 AM