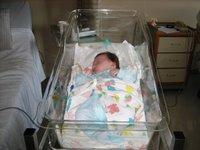 Poor Hannah has had more tests done on her than any baby should, especially considering she doesn't look, act, or even feel sick. :( The good news is that the doctors are working hard on her case and slowly unraveling the mysteries behind it. The results of her spinal tap came back negative so that is a good sign. Although, Dr. Hendrick is going to call and talk to the lab people who interpert the test to see exactly how acurate it is and determine it's margin of error. He doesn't want to take ANY chances with her treatment. On Sunday night we found a spot on Hannah's arm that looked suspicious. Yesterday they burst the leision and took a sample of the fluid inside to run cultures on to see if it is indeed a herpes leision. Hopefully it's just some random scrape or something. Eevn if it does come back as positive it really doesn't change her treatment though. Right now she's still only slated to be in the Hospital for 14 days of IV meds unless we find out that the spinal tap test is not reliable and they have to run a second one. I sure 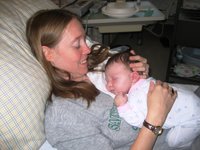 hope not because I don't think I could stand to watch her get another one of those! Dr. Hendrick is also consulting with the children's infectious disease experts at Riley to see if there is anything else possible that they could be doing for Hannah to ensure that everything turns out well. We really appreciate the concern that all the doctors and staff at Home Hospital show for Hannah. They all just love her. She has every single staff member on the pediatric unit (nurses, housekeeping staff, doctors, volunteers, and nursing students) wrapped around her tiny finger! She's already learned how to bat those long eye lashes of hers and get absolutely anything she wants! She's even managed to weasel a swing out of them for her room and boy does she like that swing! We may just have to get one of those when we return home! Tiffany is beside herself with grief over Hannah's infection and completely blames herself. She came to see her on Sunday and I think it put her a little more at ease when she was able to see that Hannah really isn't in any distress and that everything was caught soon enough that she shouldn't ever really be in distress unless they have to do any more tests. The tests are really the only things that bother her. Other than that, she is happy as a clam. :) She is finally allowed visitors, visiting hours are from 11am-8pm, but everyone (evn doctors and nurses) except Kyle and I must suit up in a gown and gloves in order to get within 3 feet of her. It's so weird that the people at infectious diseases require that, but they do even though it has been determined that Hannah really has no chance of spreading 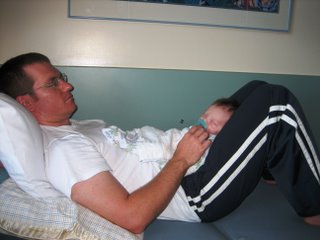 the virus to anyone unless they are severely immune compromised and even then the chances would be slim. Thank heavens Kyle and I don't have to don all that gear. It would really be a pain. We just have to scrub down every time we leave the room and make sure that we don't ever take Hannah out of the room unless they have to run a procedure on her. Well, that's all the updates I have for now. Continued prayer support would be appreciated.
Posted by Mama at 8:31 AM