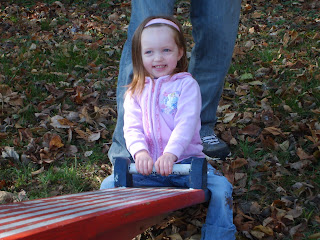 I know Thanksgiving has come and gone and everyone else has done their "thankful" posts, but I'd still like to write one. I am SO thankful for my family. Hannah and Kyle are my reasons for getting up every morning. I am eternally grateful for God placing them both in my life. When I think about my life before the both of them it just seems odd. I feel as if they were always a part of me. I am thankful for a warm bed to sleep in and plenty of food to eat. I am thankful to live in a country where I can worship God without fear of persecution. I am thankful for my friends and extended family and all the fun times we are able to share together. I am thankful for Tiffany and Mike and the sacrifice they made in order for Kyle and I to become parents. I am thankful that they have both chosen to continue to be a part of our lives. I am thankful that Hannah will always know about her birthfamily and if she ever has questions she will know that she can either ask Kyle or I or just pick up the phone and call Tiffany or Mike and ask them. Most of all, I am thankful for Jesus and his amazing sacrifice of dieing on the cross for my sins so that I can live forever in Heaven with him.

Moving on to current news in the Spontak household. . . . Poor Hannah has a double ear infection AND a staph infection. Along with that she's got a cold and a horrible cough. She's miserable. I 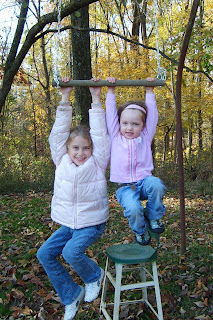 feel so bad for her. I gave behavior boot camp (more on that in a moment) a rest today to simply cut her some slack.

Even though she's sick, Hannah's been doing some mighty fine reading lately. Her sight word vocabulary continues to increase and she's starting to read sentences consisting entirely of words that are sight words for her quickly enough to have some comprehension. This is a big deal. She no longer labors over every single word pausing to notice each and every word, but reads fluently from one word to the next until she reaches one that is not immediately recognizable and then attempts to sound it out. Tonight in the bathtub she was asking me to write sentences for her to read on the bathtub walls using her tub crayons! Don't get me wrong, we aren't reading chapter books here or anything, but still mighty fine reading for a two year old if I do say so myself. Here's a sampling of what she was reading tonight in the tub. I can see a cat. The dog can run. Hannah sees the sun is up. Daddy loves Hannah. We like cats and dogs. Can you see the bus? They see it. We like to go to the zoo. Do you like bees? Mommy and Daddy love me. He is up. Is it on the top? No, you can not run to the bus. Are you sensing a theme here? :) One thing that is really cool is that she's very good at using picture clues and context to figure out an unfamiliar word. For example, the other day she was reading a book she had never seen before that had two sentences per page and followed basically the same format on most pages. The first line was usually, "Can you see it?" Then the next line was something to the effect of, "I can see a ____________." (or we see a, they see a, he sees a, etc) Most of the words for what the people saw were not words Hannah is able to sound out, but she was able to figure out the mystery word using the context and the picture on each page. She read the entire book without error pointing to each and every word as she said it, even difficult words like rooster, horse, and mouse. I was so proud of her. I thought Kyle was going to have a heart attack when she picked it up and read it like a pro for him. When she finished he turned to me and said, "Does she have it memorized?"

Ok, about behavior boot camp. Lately Hannah has been VERY sassy. She says "NO!" all the time, shouts, whines, and uses a nasty tone of voice to attempt to get what she wants. I've tried a 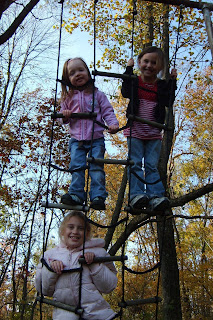 bout everything, but hadn't really seen any results. Things got really bad over the holiday weekend after being indulged by various extended family members at Thanksgiving gatherings. I finally had enough and informed Hannah that she would no longer get warnings about speaking rudely, arguing, or saying "NO!" when told to do something. Now she is immediately put in time out without discussion or elaboration for any of those offenses. So far this shock and awe method has been working fairly well, but it's too early to say if it's a real change in behavior or if she's simply feeling out the changes.

Hannah's appointment with the orthopedic doc is Monday. I'm very anxious to go and see what they suggest. Lately her running style has become more and more "odd." For you horsey people reading, she very significantly wings out when she runs and this really slows down her speed, causes her to veer to one side, and seems to increase her tripping. Tuesday is our meeting with the special education department within the local schools to begin the transitioning process from early intervention to the public school system. I am also anxious for this meeting since I just have a feeling that it's going to be a tough road given her gifts to convince anyone that she ought to qualify for special services. I plan on taking some videos of her at school and at home to demonstrate the significance of the difference between her capabilities and what she is able to display at school to take to the developmental clinic in February, so if I need to use some of that footage to convince the folks here that there are definite issues then I will. 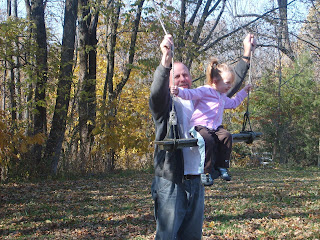 Hannah is seriously excited about Christmas this year, but doesn't quite get that Christmas is a holiday/event/day and not a place. Multiple times a day she asks me if we are going to Christmas today. She's still sorting out the secular and religious aspects of Christmas. Today I gave her a children's nativity set to play with. While I was opening it up she saw Jesus in the manger and correctly said, "That's baby Jesus!" Then she caught a glimpse of a donkey and asked, "Is that Jesus' reindeer?" I had to bite my lip not to laugh hysterically in her face. A lengthy conversation resulted detailing the characters in the Christmas story and differentiating them from Santa and his friends. Last year she wouldn't go near a Santa and referred to all Santa's she saw as "No-Na" AKA Noah as in Noah's ark. This year she's requested several times already to go see Santa (and his reindeer). I plan on taking her, but I'm not optimistic about the prospects of the visit being successful. Then, you never know. She does have a thing for men with facial hair! I'm really looking forward to decorating the house and picking out the tree with her this year. I just know she's going to have a blast. Now will be the time when she starts understanding and 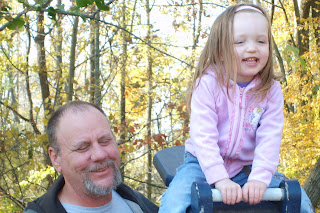 remembering traditions and begins to form warm fuzzy (hopefully) holiday family memories. We will also be going to see the Nutcracker in a few weeks. Kayla (Hannah's birthsister) will be performing in the production and we've been invited to attend. I'm super excited because I've always wanted to see the Nutcracker and also because I think Hannah will love it. While we were on our cruise in September Hannah was enthralled by the Vegas style shows they had each night. She loved the singing and dancing and would get up and dance along. I think she'll really like the music, costumes, and dancing at the ballet. I just hope she'll be able to sit through the whole thing. I'm not sure how long it is.

The new play room is proving to be a resounding success. We spend TONS of time in there, mostly on the hammock. It's been quite helpful in calming her when she's out of sorts and an awesome way to do a little sensory pick me up as needed throughout the day. She loves to climb in and out of the hammock and to throw herself to one side so that she tips over and falls out 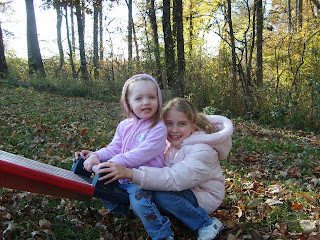 onto the bed. She thinks it's hilarious and we get that glorious "coo" of happiness we used to hear when she was a baby when she was in her swing or when Kyle would do the "Demon Drop" with her (hold her in a prone position over his head and pretend to drop her to the floor, slowing the speed just as he reached the floor to lie her gently on her back). We hadn't heard that lovely sound for quite some time. It really is the ultimate sound of happiness and contentment. I wish I could recreate it for you. Maybe I'll try to get some video of it.

PS. The pictures are from Grandkids' weekend at Mamaw and Papaw's house in November.

Sorry to hear Hannah is sick. We've had a lot of trouble in the past with Meechi getting ear infections.

Her ability to read at such a young age just amazes me. I hope her gifts don't keep her from getting into the preschool. I know for Meechi to qualify he only had to meet two criteria. Not sure what it's like where you live, but maybe it will be similar.

Oh, I hope Hannah feels better soon. And I love that you feel thankful to have a continuing relationship with your daughter's first parents. That is one thing about China adoption that is so, so difficult. I would give anything to have that for our daughter. I know you understand.

Hope Hannah gets better soon, for both your sakes! I like your behavior bootcamp idea. I may have to try it. SOme days my son is so sassy and I can't figure out what is causing it or what to do about it....