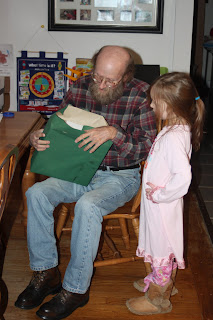 Lately Hannah's been coming out of her shell a bit socially, at least with kids she knows pretty well. With this new found social interest has come another set of problems for my little girl. As she plays with her friends she MUST be in control of the entire situation. She orders around her playmates with the force of a drill instructor. "You go there! No! No playing with the blocks! We are playing tag. Here's the plan. You go over there and wait for me until I get there. Then I'll tell you what to do next." Sometimes the kids just go along with it. For example, at the library this week she had a whole posse following her around the children's library obeying her every command. It was actually quite impressive to watch, if not a little disturbing. Other times the children come complaining to the adults that Hannah won't let someone else play, or won't let them choose what they want to do, or that she is simply being too bossy. I worry that if she keeps this up then some of the kids she loves to play with will no longe 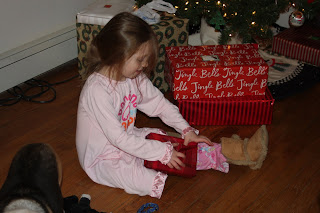 r want to play with her. In fact, I've seen that in certain situations already although the kids have always given her another chance on a different day.

I feel like it's such a fine line to walk to decide how best to handle this. I don't want to squelch any leadership potential she has, but at the same time I don't want her to alienate herself from the other kids just when she finally seems able to make friends. The problem is that she has a very limited ability to put herself in someone else's shoes. She can't transfer how she feels when she is excluded or forced to do something she doesn't want to do to how other children might feel when she does the same thing. We talk about it over and over again, but it doesn't seem to be sinking in. What I wish would happen is for another child to stand up to her in a firm yet gentle way and basically put her in her place without completely breaking her spirit. 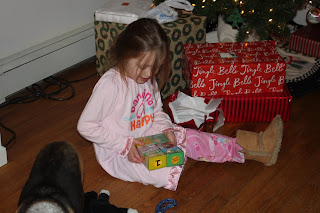 In case you hadn't guessed it, Hannah is back home and I'm very happy about that. It's been a bit of a bumpy road reintegrating into the routine of home life for her though. We've been seeing a lot of aggression and pushing of boundaries. I'm sure the fact that Christmas is coming isn't helping in that respect! The hardest time we've been having is my nemesis, tooth brushing and washing up. Getting ready to go in the morning and getting ready for bed at night have simply been a nightmare since she's been back. It's where we've experienced most of our aggression and almost all of our meltdowns. So far I'm not seeing much to cheer about with 123 Magic. Kyle still thinks its making a difference, but I'm much harder to convince. He's not been the one who ha 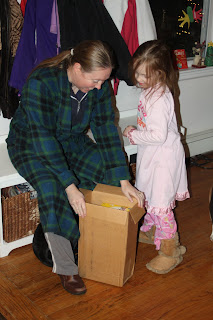 s been being scratched, hit, and kicked!

We did learn a surprising new fact about Hannah though. She can do simple addition problems (sums under 10) in her head now and has many of them memorized. She's also begun doing some subtraction and division in her head as well! She really does amaze me sometimes with the things she just spouts off that I had no idea she knew. Lately she's been very curious about words and their meanings. She asks me about dozens of words a day- some are words I've said or words she's heard on TV, others are words we read in books. Later she likes to try out her new words in novel ways. Sometimes she's successful in using them correctly, but more often I get to have a nice private laugh at some of the sentences she comes up with! :)
Posted by Mama at 9:59 PM

Anonymous said...
This comment has been removed by a blog administrator.
9:16 AM