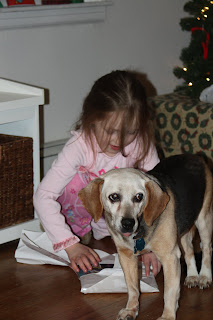 Boy has our house been full of the Christmas Crazies lately. You would think that being a thousand miles away from family and most of our friends that we would have a peaceful, low key holiday season. You would THINK, but that was not the case. Hannah was totally WIRED about Christmas this year and as a result her impulse control was even shakier than usual. She managed to have a blast and so did we, but it came with some truly tense moments. It didn't help that Kyle was out of commission for most of the season having just had his tonsils out. We were basically a one parent household with our normal routine thrown to the wind-not a recipe for success.
All the commercialization surrounding the season and generous family members who love spoiling Hannah with gifts and candy made it hard to get her focused on the reason for the season and the gimmies reared their ugly head. Hard as we tired to reinforce the meaning of Christmas, I feel that Hannah was so fixated on presents that much of what we did went in one ear and out the other :( Those gimmies are a nasty bug to get rid of and they led to some spectacular meltdowns, even causing the "library curse" to strike again. While at the library Christmas party some kids came up to me complaining that Hannah would not let another little boy pla 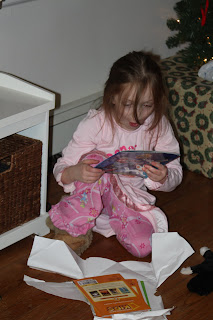 y with them. When I went to talk to her about it she freaked out and tried to run away from me. When I caught up with her she started hitting and kicking so we had to take an early leave of the party. The children's room was PACKED to the gills because of the party so I had quite an audience as I attempted to wrestle Hannah, her boots which she kept kicking off and sending them flying across the room, her winter coat which she refused to let me put on her, my camera, and the leftover party snacks we had brought out of the library and into the car. It was NOT a pretty sight.

The joy on Hannah's face Christmas morning however made all the craziness worth it. The wonder she expressed at how Santa managed to get into her room while she was sleeping to leave her a new book and a stuffed Bolt dog just inside her bedroom door, the smile she flashed and the absolute speechlessness that overcame her when she saw her dollhouse under the tree, the genuine thank you hugs she gave Kyle and I for the gifts, it was all just glorious. We've spent a good many hours the past two days playing new games and moving little 3 inch dolls around their new home. Hannah even loaded up the roof of their car with all of their furniture and drove it around the dining room when it was time for them to move! 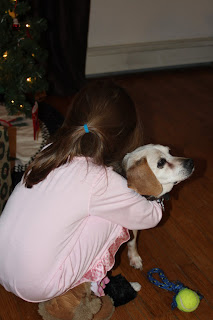 One nice thing about having so much down time the last couple of days has been that I've had the opportunity to have some serious conversations with Hannah. We were able to talk about what it means to be saved and have Jesus in her heart and how exactly to do that and also what it means if someone is not saved and dies before they ask Jesus into their heart. She definitely seems to be processing everything and has had many questions about "the bad place" as she has dubbed it. She's not ready to make a decision for Christ just yet, but the seeds have been planted and it's up for Kyle and I to tend to them and to God to help them grow. She does know she doesn't want to go to "the bad place," but truly deciding to always try to make decisions that please Jesus seems a like too much work to her.

With all the talk about heaven and hell and what happens to people when they die, I'm expecting some tough questions about what happens to animals when they die as well because one of our dogs has recently been given 2 weeks to live by our vet. We've had Abby for pretty much as long as Kyle and I have been married and of course Hannah has never known life without her. Even though Hannah isn't particularly attached to Abby (she's 18 years old and has never bee 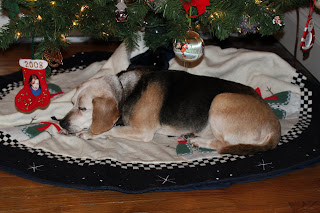 n particularly lively since Hannah's been alive!) she doesn't care for change and Abby's been a constant, dependable presence her entire life. I'm expecting Abby's death will rock her world, not because she'll be grieving a loss of a friend like I will be, but because her routine will change. Maybe she'll surprise me and be really sad about Abby being gone, but I don't think so. The other day I tried to broach the subject of prepping her for the event and she replied, "I don't care. I'll still have another dog. I'll have Sally. She's my dog." Whatever happens, it's going to be tough. That I'm sure of.
Posted by Mama at 8:11 PM

I'm so sorry about Abby. That just breaks my heart. I'm ridiculously attached to my 13-year-old cat, and I dread that day. You'll be in my prayers.

hello, you don't know me but I came across your blog as I was researching home sensory rooms. I am a mom of 2 boys. My oldest is 4 and has aspergers and SPD. He is very high functioning and one smart cookie. I also have a 2 year old boy who is being evaluated in a few weeks and my gut is telling me he is definitely on the spectrum and more affected than his brother. I can't tell you how much it meant to me to read some of your thoughts and experiences with your daughter. Would you be willing to communicate with me via email to discuss aspergers? It has been one year since my son was diagnosed but I don't have much of a support network yet- I've been so busy with my sons various therapies and appointments I swear I don't even know how to socialize with friends anymore :) Anyways I'd love to pick your brain and reach out. I wish you all the best.
Laura, Springville Utah

Lydia, Thank you for your thoughts. Losing Abby has been incredibly hard for Kyle and I (Hannah not so much!). She was 18 though and that's really old for a beagle. She's had a good life while she's been with us the past 10 years (although her first several years of life weren't so rosy) so hopefully that counts for something.

Laura, feel free to leave me your email and I'll get in contact with you. Blogger doesn't show me your email address otherwise I'd have already sent you an email!