We've begun yet another behavior modification/reinforcement 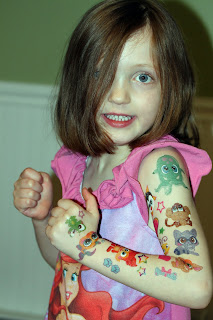 strategy in our house. A good friend of mine does something she calls Mommy-Mart with her kids. Each child has a cup and they earn pennies (or sometimes more) for all sorts of good behavior. She home schools so they earn for quality effort in their schoolwork. They also earn for chores, good behavior, using their manners, etc. Then they can use their money to "buy" things from the Mommy-Mart once a week. If behavior gets really bad, shopping day is delayed and that's always a HUGE deal. I decided I would give it a shot with Hannah. She had seemed interested in it when she saw Ann-Renee's kids doing it and she is VERY interested in money right now so we are going to try it out. Day one was today and it went fairly well. Hannah earned 17 cents for the day and I also pointed out opportunities where she COULD have earned more money had she made a better choice. Of course she didn't like being reminded about lost opportunities and the cash that had slipped through her fingers, but for once she seemed to make a bit of an effort to change her behaviour a few times throughout the day which is a first! This may be a huge flop, but really I'll be satisfied if it gets me through our move. If we only ride the novelty of the program out for the next few weeks I think it will be worth the try! 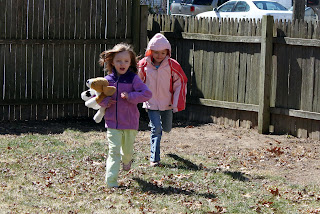 Speaking of the money portion of Mommy-Mart, counting money has been Hannah's newest academic achievement. She can now count just about any amount of change up to $1.00. She might be able to go higher, but I haven't tried that yet. I want to be sure she has a solid foundation before I add the paper money to the equation. The coolest thing is that she can actually do it in her head without even seeing the actual money to count it out. She had me quizzing her the entire meal during dinner tonight. I would ask her questions like, " How much money would you have if you had 2 quarters, 1 dime, and 3 nickels?" and she would get the right answer about 90% of the time! Actually, every single time she got the wrong answer was when it involved her having to say the number 15. For some reason whenever she says any of the numbers in the teens she hears 50 instead of 15, 60 instead of 16 etc. So, when she's counting on in a problem like 1 dime, 1 nickel and 4 pennies she will often say, "10, 15, (hears 50) 51, 52, 53, 54. " instead of saying, "10, 15, 16, 17, 18, 19. " Anyway, that's the latest on my smart cookie. She probably counts change better than 90% of the fast food workers here in Rhode Island!

An interesting thing has been happening lately. Hannah has always been mistaken for older than she is because she's tall for her age and she has advanced language skills as well, but lately people have 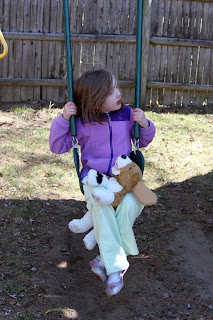 been guessing her at 2-3 years older than she really is! 3 times in the past week I've had someone suggest to me that Hannah was 8 years old and in the 2nd grade (and thus must be on spring break since she was out and about with Mommy) and each and every one of them gave me looks like I was absolutely insane when I informed them that actually she is only 4 yrs old. It's like they seriously think I have no idea how old my own daughter is! Hmmm. . . . If this trend continues it could be a BIG problem if Hannah ever tries to use her "fake" age to her advantage. I totally wouldn't put it past her either if her sneakiness now is any indicator! Pray for me please. The teen years are gonna be tough!

Photo Notes: The first photo is of Hannah showing off her "sleeve" that daddy gave her with temporary tattoos. The last two are of Hannah and her friends playing "super wairies" See this post if you don't know what a wairy is!
Posted by Mama at 6:42 PM