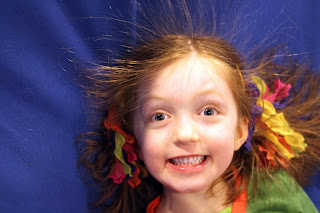 I can't believe I neglected to write about the best part of Hannah's phone adventure in my last post. When I walked into her room to find her chatting on the phone she was talking to my step dad. She had called him because she really wanted to talk to my mom, but she couldn't find her phone number in my phone book so she had called Tom to get it! Now my mom's number IS in my phone, however it isn't filed under Mamaw or her first name! Of course it's under mom, but Hannah only knows my mom as Mamaw and her first name and she couldn't find either of those in my phone. My step dad is in there under his first name and since she knows him as Papaw and his first name she thought she'd do a little 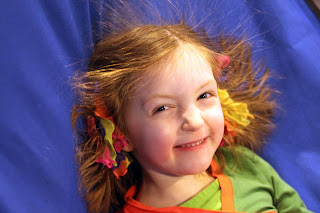 problem solving and just give him a call to get Mamaw's number! The little stinker!!! Smart, but a stinker none-the-less!

The behaviour around these parts has been pretty rough the last few days. It started the instant we dropped Kyle off at the airport. My punishment for delivering Daddy to the plane was having to drag my almost five year old daughter on her stomach through the main aisle of the grocery store to check out while simultaneously dodging hits, kicks, and bites. This continued out into the parking lot and all the way to the van. Eight things, I only had eight things on my list and we HAD to get those things. We had nothing to eat in the house so I couldn't just abort the trip like I often do when things go bad-just leave the cart in the middle of the aisle and run. We couldn't even manage to buy 8 things. UGH! The night only got worse from there and I ended up putting her to bed at 5:30pm! She had lost every possible privilige for the rest of the night so there was really nothing left for her to do so she went almost willingly. She ended up reading to herself until she fell asleep. I found her with a book open on her chest and the lights still on at 8:00pm. I'm not sure when she actually fell asleep, but she looked peaceful and happy. If only I could bottle that peace for when we need it during the day!
Posted by Mama at 9:14 PM

Sorry to hear things have been so rough lately. Here is to hoping that they get easier soon.