We got the results of the culture on Hannah's spot on her arm and it is NOT a herpes leision. They think it was probably just an irritation from her IV. That is really good news. That,combined with the negative result from the spinal tap means that she is now out of isolation! YEAH! Now we can walk the halls with her when she gets fussy instead of making ourselves dizzy pacing around her room. She still can't go off the wing, but out in the hall is better than nothing. Visitors also no longer have to gown up to come into the room. Now they only have to gown up if they are going to hold her. This is also good news. The only not so good news we have is that Hannah's poor little veins are not tolerating the IVs very well. She's on her fourth site since 3:00 am Saturday morning. She's had one in both hands, her right foot, and now her head! The one in her head is already causing problems and it's only been in since 2:00am this morning. So, either tonight or tomorrow morning they are going to run a central picc line in her because they are running out of sites to stick. The only other issue she seems to be having is that the medicine upsets her tummy a bit we think. It's very strong stuff and she's been having more problems than normal with spit up and general fussiness.

Yesterday Kyle and were looking at Hannah and we thought, "Wow, she looks longer. I wonder if she has grown?" So we asked the nurses to borrow a tape measure and we did our best to scientifically measure our squirming, wiggling, ball of fire of a daughter! According to our calculations, she has grown a half inch and is now 22 inches long! They weigh her every day and the nurses report that she is gaining over an ounce a day which is really good. Today she weighed in at 9 lbs 8 oz! She's taking 3 oz of formula at each feeding which they say is really good and we've even been given the ok to let her sleep 5 hours at a time at night without waking her up for a feeding! A bottle every 5 hours at night sure is a lot better than every 3 hours! 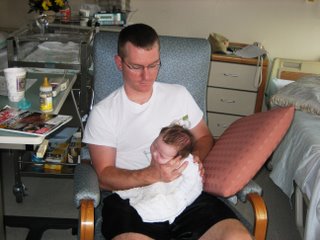 So, Hannah is really doing pretty well. Kyle and I on the otherhand are exhausted. Spending all day in one room really wears us out and the general atomosphere on the wing is understandably depressing since it's filled with sick or hurt kids. I don't know how the nursing staff manages. Already I'm emotionally drained from being around it so much. No matter how comfortable they try to make the wing or how happy they try to be sick kids are sick kids and that's no fun. We are each taking turns going home for a few hours each day to take care of the pets, get a shower, and just generally be away from the hospital. I'd say the biggest inconvenience is eating. I'm already sick of take out and it's really not feasible to buy groceries and make food. The cafeteria is expensive and not all that great. So, meals are really a pain in the butt. It's too bad we HAVE to eat something otherwise I think I just wouldn't even bother!

Today a nursing student had Hannah as her patient and it was her job to give Hannah a bath (I usually do that myself, but they talked me into letting the student do it for the experience) and take her vital signs every 3 hours. Well, the student was not a typical student age. She was a mother of 3 and a grandmother of 1 so I figured she would be really good at the bath at least. Boy was I wrong! I can't tell you how hard it was for me to not to run over and push her away from Hannah! Now I don't claim to be a baby expert and I'm definitely not the best at bathing, but I do ok and Hannah doesn't put up much of a fuss at all. BUT, when this student bathed her she screamed bloody murder the whole time. The lady was jerking her around, forcing her to straighten her limbs, letting her head flop around, not rinsing well, getting water and soap into Hannah's eyes, not drying her betweeen each body part, and not covering her up when she moved elsewhere so she would stay warm. It broke my heart to see my little one in such needless distress. Afterwords I told the student supervisor that I would rather she not bathe Hannah again tomorrow or if she did if that I would like the supervisor to actually supervise her while she did it. I'm was not about to let Hannah go through that again. She's had enough trauma that last few days. Bath time doesn't need to be another one!

Thank you so much for all of your prayers and well wishes. Kyle and I really appreciate it and I'm sure Hannah will too when she's old enough to know better.
Posted by Mama at 5:07 PM

Okay....heaven knows I am no pro...but common sense dictates that you cannot jerk around a baby while she is being bathed and she needs to stay warm! Did her kids turn out ok? I wonder. Best of wishes to you guys. I am over at Chris's regularly and that is near the hospital (only 2 blocks!). If you are still there early next week, Ill drop by. Lots of hugs and kisses for little Hannah.

I am glad to hear that Hannah is doing well. I tried to visit you at the hospital on Thurday, but they din't have any record of you being there. I have a little gift for Hannah when I see you next (-: