We had a very scary Saturday night and Sunday with Hannah. Hannah spent most of Saturday with Mamaw and Papaw and had a great day. She had a blast playing with them while Mommy and Daddy and Aunt Heather worked on Grandpa's house. We took her home and she was happy as a clam. When it came time for her last bottle and bed she was still in a great mood and laughing and giggling. I fed her and she drank all, but an ounce of her bottle. This hadn't happened since we cut her formula back down an ounce per bottle, but it wasn't totally unusual fer her not to take all of her last bottle. We just assumed she was tired and she was certainly acting tired. Kyle took her to her room to read her a story and sing to her before bed and no sooner had he sat down in the rocker than he hollered for me to come quick. Hannah had just projectile vomited pretty much her entire bottle 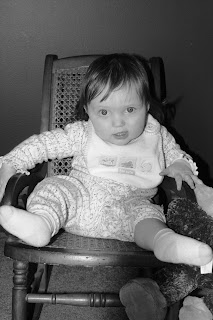 all over Kyle, the chair, and the floor. The puke shot almost 3 feet! Kyle said it was like a scene from the Exorcist! I quickly cleaned up Hannah and got her changed. We took her temperature and it was 99.8. That wasn't a huge fever so Kyle picked her back up and started her bedtime routine again while I tried to clean up the floor a little bit. She threw up again almost immediately and it was projectile again and I got to witness it first hand this time. Kyle got a lot more of it on him this time so he gave her to me and went to change clothes. I got her new outfit off and was about to wash her off when I heard her having diarrhea. When I opened up her diaper there was the most foul smelling and liquidy poop I had ever seen. I changed her diaper and then took her temperature again, this time rectally which she normally hates. While taking her temp she actually fell asleep and was VERY lethargic. Like I said she really doesn't care for having her temp taking so her falling asleep was a huge red flag for us. This time the thermometer was 101.8 corrected for the rectal reading. We got her dressed and started thinking about if we should take her to the ER. Kyle decided to take her temp again under her arm after a few minutes had passed and while he was taking it she threw up again. The thermometer was reading 102 and still climbing when she threw up and the session was aborted. We cleaned her up and high tailed it to the ER. While I was checking her in and Kyle was parking the van Hannah threw up on me and my coat, but that was the last time she would vomit that night (and actually we haven't had anymore up to this post yet so keep your fingers crossed for us). By the time we actually got out of the ER waiting room and saw a doctor Hannah was burning up, but shivering since they had us take off all of her clothes. They took her temp rectally again and it was 104.5! They gave her Tylenol and Motrin and then started to do a bunch of tests to see what was causing the fever. They catheterized her to test her urine, did another awful chest x-ray on her, and then attempted to take blood for some blood tests. There we ran into a road block. Two different ER nurses couldn't get Hannah's veins so they called for the pediatric nurses to come down. Two of those nurses couldn't get her veins either so they then called in the elite special forces from the NICU to try. They ended up getting a bit of blood from Hannah's arm, but it immediately clotted from the damage to her veins and wasn't any good for the blood tests. Eventually they got a tiny bit of blood (they had to prioritize what tests to run because there wasn't enough to run them all!) from a vein in her forehead and started her IV in that same place in order to rehydrate her since she was very dehydrated from the fever and her vomiting and diarrhea. Eventually they came and told us that Hannah had pneumonia and said that that was what was causing the fever and vomiting. They sent us home around 3am Sunday with a prescription for a very nasty antibiotic cocktail and an extremely tired baby. Kyle and I took 2 hour shifts throughout the rest of the night and day giving Hannah her Tylenol and Motrin every 2 hours and Pedialyte every 20 minutes. It was exhausting, but Hannah's fever started to stay down around 8:00pm 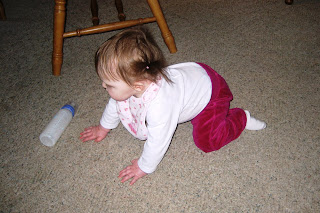 Sunday without any fever reducer and she started keeping down some formula.

Today her fever stayed down until about 10:00am and then spiked back up to 101 degrees so I had to start giving her fever reducer again because they said to not let her temp start to climb at all. She started back on her normal bottle schedule and has so far kept everything down. The antibiotic has started diarrhea very badly and Hannah's soaked through more onesies and sleepers than I can count. She's been averaging at least 1 diarrhea soaked diaper every half hour! All that pooping has really been wearing her out so she's slept a restless sleep on and off all day. I took her to see her doctor (we LOVE Dr. Hendrick) as a follow up today. The first thing he said was, "Tell me the whole story from the beginning because no offense, but I don't trust ER docs with my babies." After reviewing the ER notes and the x-ray tech's notes he severely questioned the decision made to put Hannah on the strong antibiotic. He wasn't even sure if he thought it was pneumonia given her other symptoms and if it was pneumonia he thought what the report described sounded like viral pneumonia and not bacterial which would mean that the antibiotics would do Hannah absolutely no good and only serve to keep her dehydrated. So, he ordered yet another chest x-ray and said he wanted to personally speak with the technician that read it to see if it was really pneumonia and if so what kind it was. So far the techs haven't sent him the results so we are still having to give Hannah the nasty medicine and change the diarrhea diapers, but if he gets confirmation that it's not bacterial pneumonia or even pneumonia at all he will call us tomorrow so that we can take her off the meds.

As for other Hannah updates, she has managed a few one and two step crawls since her first try, but so far she's not really figured out that she can indeed use it as a means of transportation. Today she did crawl backwards for 5 steps, on accident I think, when she was trying to sit up on her new play mat. It's a bit slippery with her sleepers on and she couldn't quite get the traction she needed and she kept sliding back on her knees. Before getting sick Hannah sampled many more table foods. She's tried chunks of softly cooked carrots, potatoes, and green beans as well as pancakes and whole wheat toast. Hannah got a new rocking chair the other day and she really seems to like it. She moves her upper body back and forth to make herself rock and she thinks that's pretty cool. She used to like doing that in our rocker and my little rocker from when I was a girl, but neither of those chairs were safe to let her sit in without being closely monitored. This new chair has a harness that keeps her safely inside the chair and specially designed rockers that keep her from tipping it over. It even has a vibrating seat which is pretty cool and we can attach a toy bar to it if she wants to play.
Posted by Mama at 11:56 AM