Yup, you guessed it, Hannah is obsessed with the B word. Bananas are now her favorite food. In fact we have to be careful not to say it unless we are prepared to give her one right then because she will want one if she hears it. If we walk past bananas in the store, if she sees some on TV, notices them on the counter, or even hears the word in a song she starts saying banana over and over again and really expects you to get her some to eat right that very second! Whenever she is eating something else she will almost always work in a request for bananas and then look at us expectantly waiting for that sticky yellow fruit to appear on her tray. It is very cute, BUT if there are no more bananas or it's not time to eat then things can get a bit ugly!

Hannah rode in her bike trailer again last night and really enjoyed herself. We went on a much longer ride this time than in the past and she just hung out back there checking out all the sights. By the end of the ride she had fallen asleep. She was so sleepy that Kyle actually managed to get her out of the trailer, take her helmet off, and put her in her crib without her r 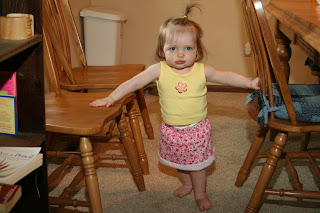 eally waking up. She slept for over an hour then and we eventually had to wake her up because we knew she needed to eat at least one more time before bed if she were going to make it through the night.

Hannah is doing better about drinking her formula and is eating lots of solid foods, but now her sleep issues are back. We are having to ferber her almost every night and I have to do it for most naps now too. :( It's really hard to hear her crying, but something has to give. She has to have some sleep. Lately when it is time to go into the room to calm her down a bit, she's been rolling over on her side and curling up in a ball while I rub her back. She sniffles and gulps as she fights to stop crying and does that until she falls asleep. It just breaks my heart to hear her, but I 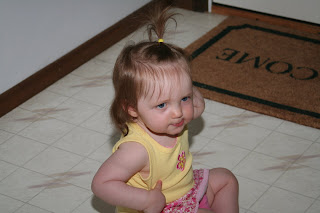 don't know what else to do. I don't even bother rocking her while I sing her songs to her anymore because she just gets upset because she knows she's going to bed. She also completely weaned herself off of her pacifier so she doesn't have that as a comfort anymore either. Her lovey helps some as does her aquarium music maker, but there doesn't seem to be much else we can do to help her get herself to sleep.

Hannah has been using the word and sign for help a lot lately. Whenever she wants to do something but is having trouble doing it, instead of immediately getting frustrated and crying she looks at us with a questioning look and signs and says help. Two incidents that happened lately were really cute. Hannah was playing with the remote control on the floor and Kyle grabbed a hold of it and wouldn't let it go. Hannah kept pulling and pulling, but she couldn't get it out of his hand. So, she turned to me and signed and said help and then looked back at Kyle and locked her eyes of the remote! After a few more repeat performances of Daddy holding the remote hostage Hannah decided that it wasn't even worth it to try to pull the remote out of his hands so as soon as he picked it up she signed and said help to me without even reaching for it at all! Then yesterday Evelyn was over and she was looking at a book that Hannah really wanted to play with. Hannah made a few half-hearted 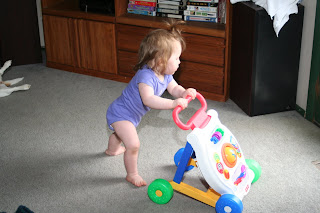 I have lots of videos to post of Hannah. Many of them are from all the way back in April, but I thought you all might like to see them anyway. I'll try to spread them out between several different posts.

These next two videos are of Hannah reading books in her tunnel. The book she is reading is actually the same book she wanted me to help her get away from Evelyn yesterday!

Hannah was really proud when she finally learned how to make her top work all by herself.

PS. Take note of all the funny faces Hannah is making in this post. I don't know what got into her, but I was getting all sorts of sassy faces out of her that day!

What no mention of Harley man? *pouts*