It's so hard for me to believe that Hannah is one year old already, but it's true. We had the party on Saturday to prove it! Speaking of the party, it was a great success. It was so nice to see everyone that could be there. The weather was perfect and I made plenty of cake. YEAH! I was even pretty proud of Hannah's little Nemo cupcake I made. I thought I did a pretty good job trying to freehand a fish when I have no artistic skills at all! I think everyone had fun hanging out and playing basketball, football, and of course having a huge squirt gun fight (that escalated into just throwing cups of water instead!). Hannah enjoyed watching everyone and crawling around in the grass. Even though I said no presents, Hannah got tons anyway. She REALLY enjoyed unwrapping all the gifts although she wasn't too sure about Kyle taking each present away when it was time to open a new one. She wanted to play with each new gift RIGHT NOW. At one point when Hannah was opening gifts, Kyle instructed her to say thank you to the person who gave her the gift and instead of signing thank you Hannah signed more! Now that's a habit we are going to have to nip in the bud early! One really cute thing that Hannah did during the party came when she was opening her gift from Sarah, Jason, and Evelyn. One of the presents was a framed picture of Hannah and Evelyn. Immediately Hannah grabbed the picture and said, Eva! She kept saying Eva over and over again and DID NOT want to let go of that picture. Kyle hung it up in her bedroom and every single time we go into her room now she looks for the picture and says, " Haaanaaaah, Eva." It about puts tears in my eyes every time! Hannah loves all her other gifts too. She got several stuffed animals and has been having a grand ole time telling me over and over again what each stuffed animal or doll is and then giving them hugs and kisses. She's really into reading her new books too. One of her favorites is a totally paper book from Evelyn's Grandma about Paul Bunyan. I think Hannah likes it so much because it has big girl pages. She's really into books that are like what mommy and daddy read at the moment. She thinks she is moving past board books, but I've got news for her, she's not getting paper books for quite awhile still even though she is quite gentle with the paper books all things considering. Hannah got two presents that are rocking toys and she's really been enjoying riding those. She gets on and holds onto the handles and just shakes her body back and forth with a silly grin on her face the whole time. One of her toys that she got is a magnetic farm with pieces of farm animals that you can stick into the barn. She LOVES playing with those magnets so much that she's already lost the back half of the cow! The animals are all in two pieces in case you are wondering and you have to match up the right head and tail to get it to sing and make the animal sound. I'm back again the next day and now we are missing the front half of the pig too! Poor animals!

Besides Hannah's party, there are lots of new stuff that Hannah is doing. It seems like she just woke up on her birthday and said, "I'm not a baby anymore. I had better start acting different." Hannah's biggest accomplishment is standing up on her own without having to use anything to get herself upright. She's been having a blast pushing herself up in the middle of the floor and 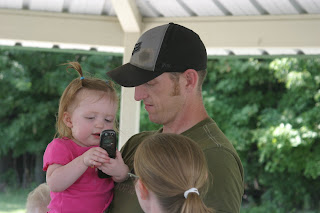 then letting her upper body flop back onto the floor. I think it gives her a bit of an adrenaline rush and since she's a little thrill seeker she does it over and over! The first time she did it Kyle and I were standing around talking to some friends of ours and no one was really paying much attention to Hannah (that was our first mistake!) and then all of a sudden I caught sight of her out of the corner of my eye and saw that she was just standing with her knees bent, kinda like she was riding a surfboard, in the middle of the room! I gasped and said, Oh My Gosh! and then everyone else looked around and made surprised noises (our second mistake!) and then Hannah got so excited that she fell over!

Hannah's pronunciation of many of her words are getting much better and she's also starting to stick in some articles every now and then. I've heard her say uh baby and the dog a few times. She's getting really good at asking for things politely and using please. She's not quite as good at thank you. We don't get any spontaneous thank yous like we do pleases, but she will do it about 70% of the time if we remind her. Recently she started calling Evelyn's mommy by name. Her name is Sarah and Hannah calls her RaRa. It's so cute to hear her, but so far Hannah refuses to do it in Sarah's presence! She'll only do it in a response to a picture of Sarah. A few days ago Hannah learned a new food word. She will now say Peesh when she wants a peach. It's so cute! Of course I'm biased since I think most things Hannah does are cute!

We're still working on using utensils and bowls at meals, but that really hasn't made any improvements. Hannah's really interested in holding the spoon or picking up the bowl, but not so interested in actually using them to eat. We got her some new big girl sippy cups without handles and so far she's doing pretty good with them. She doesn't always finish all of her milk out of them, but that could also be because we've started to add more milk and less formula instead of the 50/50 mix she was getting. We found out the other day that Hannah really likes homemade pizza. We made a Boboli pizza for dinner with sausage, green peppers and onions as toppings and she scarfed it right down. I guess she's the typical American kid with a pizza addiction!

Besides practicing standing, Hannah has also been working on her climbing skills some more. She's REALLY good at climbing onto things now and she can also get back down from most things. She's started to want to try to step down the stairs to the deck instead of crawl down backwards. She wants me to hold her hand and then she slowly and carefully takes tiny steps 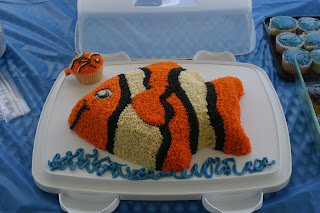 to lower herself down. I'm a bit worried that once she gets good at standing on her own that she's going to try to walk down those steps on her own while I'm not looking and take a header off the deck! Another physical skill that Hannah has been practicing is bouncing, rolling, and throwing a ball. She got a bouncy ball for her birthday and she already had a soccer ball and now she plays with them almost every day. She will even go get one and then roll it to you to get you to play with her. Kyle taught her how to dribble a ball at her party and now she's really into bouncing the ball. She will pick it up, throw it towards the ground and gleefully shout "Buhall!"

Hannah's interest in books continues to grow and her fixation on adult books has grown. It's as if she thinks that board books are too babyish now and she wants books with paper pages. I've had step up my vigilance in keeping her out of our book shelves. We did give her one old golden book and one of Kyle's old paperback books to practice turning the pages on and she LOVES 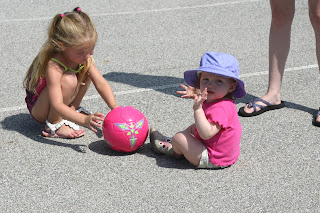 that. For her birthday she got 2 books that had paper pages and I decided that I was just going to let her have them and if the pages got torn, they got torn. They are her books and she ought to be able to have them. So far she's been really good with them although she did accidentally rip on of the pages because the book had a handle and so the pages had a hole cut out of them for the handle and she got her hand stuck in there and couldn't get it out and she pulled really hard and ripped the handle off that page. Not too crucial since none of the words and not really any of the picture was on that part.