Football in the Rain 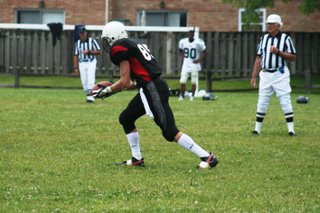 Well, we went to see Mike play football this past weekend and boy was it a nasty day! The weatherman forcasted a 30% chance of scattered showers, but we must have been "scattered" b/c we got downpours and more! It did however clear up lo

ng enough to get in the scrimage. It helped that the other team was over an hour late getting to the field. Mike's team, The South Central Broncos, played a scrimage against a t

eam from another league. While the team was fairly good (I think anyway, but then what do I really know about football!), they sure weren't very nice. Lots of trash talking going on, but Mike seemed to be able to tune it out. Even though it was cold and wet, I managed to have a good time. I always love the chance to take photos and

I got plenty of those chances at the game! I filled up the entire gig memory card! I'm going to send some to Mike and then print out some for the baby's scrapbook so she will know more about what her birthfather was interested in. I'm going to try to post a few pictures from the game on here if I can. Mike's number 85. He plays tight end and sometimes gets pulled in as the kicker too!

The day before the game I got to talk to Tiffany and it sounded like she was doing pretty well. She said the baby is getting big and is pretty active~lots of kicking her in the ribs! She's really ready for this baby to be born! Right now she's trying to decide whether or not to have a C-section. She really wants to have a natural birth, but is a little bit scared of the possible risks that go with having a natural birth after a c-section. Apparently there is a slight chance of her incision opening back up during the birth and causing problems. She's a little scared of that and I must say I don't blame her. Then again, with a natural birth her recovery time would be shorter. She has another doctor's appointment on the 19th and apparently she has to decide by then whether or not she is going to schedule a c-section or let things go naturally. Prayers that she will be able to make a decision that is best for her and the baby would be appreciated.
Posted by Mama at 12:31 PM