Mike (our birthfather) called us yesterday and left us a message. We had been planning on going to see him play in one of his football games, but we needed more details. Mike plays semi pro football for a team in Indy and Saturday is his season opener I believe. It's a home game anyway. So, he invited us to go watch. Kyle called him back last night and talked to him about the details. It turns out we are going to go up around 10:00am and have an early lunch with him and just hang out until he has to be at the field. Then we will probably go wander around Babies R Us or bug Heather at Old Navy if she has to work that day since we are having lunch at the Applebees in the Greenwood mall again. On Mike's message he said that he had bought us a present for the baby. Apparently it is some sort of a calendar to record baby milestones with a spot for pictures each month. Sounds cool. I thought that was very sweet of him. On his message he said he thought it was cute so he bought it. It made me smile to hear a guy as big as he is saying something like a calendar was cute! He also brought Kyle up to date on his commercial appearance. Apparently he's been chosen from his team to star in some sort of a football commercial with Peyton Manning and Terry Bradshaw. He's quite excited about it since he really likes both Peyton and Terry Bradshaw! He said the taping will be coming up soon.

We didn't have a chance to talk to Tiffany this weekend, but Mike said that at her last stress test and ultrasound they said that they were going to stick with the plan to either induce or have a C section before she is full term. According to Mike the plan is to have the baby in about 3 weeks! So it looks like we will be parents sooner rather than later.

Well, I'm going to try to add some more of the ultrasound pictures and pictures from our match meeting onto this post. I hope you all enjoy. 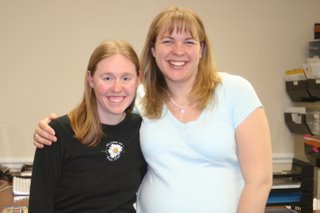 This picture is of Tiffany and I. She's so much taller than I am that she took off her shoes for this picture! I just love Tiffany. She is so sweet and very easy to talk to. I was really nervous the first time we called her, but after about 5 minutes on the phone it was like I was chatting with an old friend that I had lost touch with! 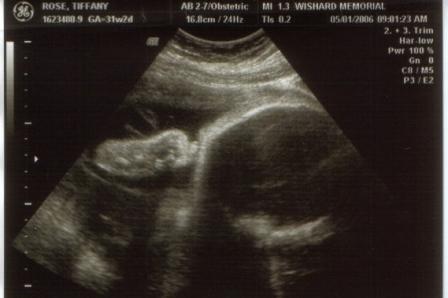 This is a picture of her foot. The ultrasound tech said she is kicking herself in the head! Quite the little gymnast already I guess! Right before the tech froze this picture the baby was showing off for me and wiggling her toes! I would have never have know this was a foot by just looking at it, but when she started wiggling those toes it was really obvious! It was so neat.
Posted by Mama at 8:11 AM