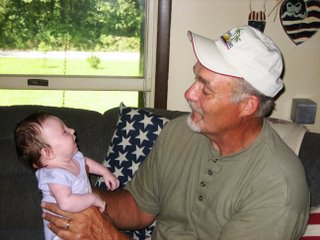 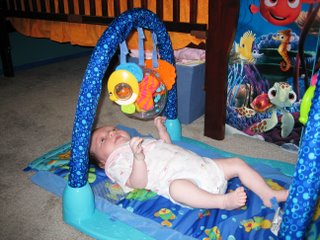 Hannah has had a steady stream of visitors and other social engagements the past few weeks. Baba (Great Grandma Spontak) and Bruno came to visit her and took her out for a walk and to dinner at a restaurant. She went to Mamaw and Papaw Like's house and got to visit with her Great Aunt Margaret and Great Uncle Russel and her Great Aunt Linda and Great Uncle Wayne. Great Aunt Jo Ellen and Terri came to visit her as did her Uncle Kevin and Emily and Aunt Tina and her cousins Ally, John, and Jessica. Hannah also went to visit her new friend Evelyn who was just born last week and is a week old today! When Kyle and I held Evelyn we couldn't believe how light she was! She weighed only 6 lbs 4 oz and it felt like we were just holding a blanket compared to Hannah! Jason and Sarah, Evelynn's parents, were quite jealous about Hannah's sleeping preferences! 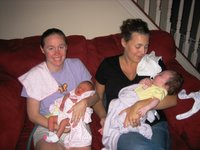 Hannah is much more aware of things now than she was a few weeks ago. She has begun reaching for things she wants and can even grab ahold of them sometimes. She's found her hands and can consistently stick them (and anything she happens to be holding) right into her mouth. She's started to bat at things that are held above her and likes to lay in her play gym and 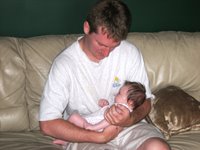 hit the balls and fish that hang above her head. She's also starting to recognize Kyle and I and smiles often when we play with her. I even got a giggle out of her the other day. She's decided she most definitely does NOT like tummy time on the floor. Apparently it's just too much work! She doesn't mind tummy time on our chests or holding her head up if we put her over our shoulder, but being flat on the floor is a huge complaint of hers. She's decided that she likes being outside and loves the feel of the breeze going over her face. She has a new gadget on her crib that lights up and plays music kind of 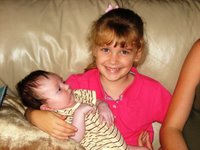 like her bouncer and she really likes that. She will watch it as she is putting herself to sleep. We've started putting her to bed at her bedtime even if she's still awake and she's been putting herself to sleep which we think is fantastic! Last night Kyle and I actually had an hour to ourselves with neither of us watching Hannah before we went to bed. It was great. We got a lot of stuff done!
Posted by Mama at 10:17 AM

Omg! She almost looks like a Toddler compared to the other baby in that picture!!!