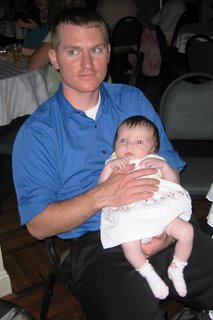 Kyle has been on me to post some of the funny stories that have come about since Hannah was born and until now I have been reluctant to report them. However, Kyle has taken to telling them to people verbally in my presence which is also embarassing so I figured I had better just get them out there and be done with it. This way I can also add the one funny story I have about him as well!

First off are the monkey incidents. As many of you may know I sleep with a 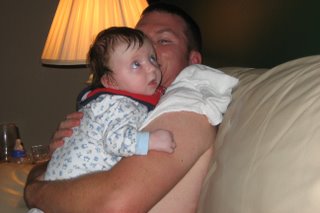 stuffed orangatang each night. I use it as a pillow of sorts to prop up under my shoulder and side. It also bears mentioning that the monkey is roughly the same size and shape as Hannah, only much hairyier! Anyway, on more than one occasion during our extremely sleep deprived period I mistook the monkey for Hannah and tried to feed it and change it's diaper while I was half asleep and was totally confused when I started to notice that something was wrong. For example the time I tried to feed it I carried the monkey from our bedroom into the nursery, fixed the bottle, and then tried to give the bottle to the monkey and just couldn't understand why Hannah wasn't drinking. It took me a bit to figure out that I didn't have Hannah. I then switched to the real baby and continued the feeding! On the diapering incident the monkey never did make it out of our bedroom, but I was totally confused as to why Hannah felt so hairy. I was thinking that I must be touching her head and tried to move farther down the body and hit Kyle's skin. I then tried to lift up the legs which happened to be his stomach! Eventually I figured that mistake out too and finally made my way into the nursery to change and feed Hannah. 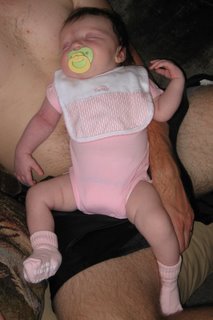 Ok, enough about me. Now for the funny things that have to do with Kyle. My favorite happened one night while Hannah was back in the hospital. I was staying up to take the midnight feeding and Kyle was going on to bed. I had the TV on quietly, but it was too much for Kyle. He couldn't sleep so he turned on the mobile music on Hannah's crib to put him to sleep! The other funny bit has to do with music as well. I often times hear Kyle randomly singing kids songs as he goes about his day. Yesterday it was "Found a peanut," today it was "Clemintine." I have also heard him singing "On Top of Spaghetti," "Here we go Looby Loo," and "Alouette" (Spelling?)

Enough stories, here are Hannah's latest accomplishments. She has almost found her thumb (instead of her whole hand) to suck on. Her head continues to grow more steady and she is beginning to lift it up from her belly without much trouble. When being held upright she can hold it completely steady and look all around from side to side with no trouble. She continues to like her play gym and can actually use the baby activated features on her bouncer now. Her new favorite game is to watch as mommy makes her monkey (Hannah's monkey not to be confused with the previous monkey!) dance and sing around her head. She tracks the monkey 360 degrees as it goes around her and smiles and coos at it. She's talking much more and smiling and laughing a lot more as well. Her reprotoire of sounds is also growing which is exciting for us. We like to hear the new sounds she comes up with! We got a front carrier for her the other day and she is really enjoying riding around in it as I do chores around the house. As soon as she can hold her head completely steady in all positions I can face her out and I think she will like that even more since she loves to sit on my lap facing out and watch what is going on. I think that's pretty much it as far as her newest tricks. She has a big weekend coming up. Her Great Aunt Myrna is coming to visit her, she has two showers to show off at, and she gets to take her first trip to Babies 'R Us! That's a lot to cram into one weekend. We'll be sure to post the details on the blog once we recover! Well, I had one more picture to post, but blogger is being stupid and it won't let me post it. Sorry :( I'll try it later.

I couldnt stop laughing. That was great. I knew that monkey was bad news when I met him about....what....15 years ago!! Hahaaa. Good job Natty....that was great. I gotta dry my eyes now....ha haaaaaaa