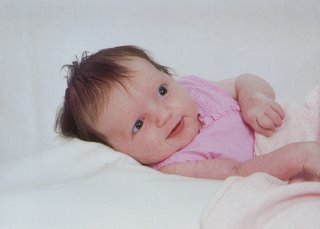 Hannah has had so many showers the presents have poured in! She's absolutely spoiled rotten! I don't think I'll have to buy her any clothes until she's a year old! On Saturday Myrna came to visit Hannah and she went with us to Hannah's church baby shower. It took place in a little deli and it was lots of fun. Hannah wasn't the only baby so I didn't feel as bad when she got fussy :) On Sunday we went to Mamaw and Papaw's for another shower. There were so many people there the house was bursting and both the deck and front porch were packed too! It's a good thing the weather was nice enough to be outside. Hannah was in top form and acting very cute for everyone. I do think she got a bit over stimulated though because she started to get fussy after being passed around and handled by so many different people. She has another shower today at school so all

the teachers can ooh and ahhh over her :) Everyone wants a piece of our Hannah. To top everything off, packages keep arriving 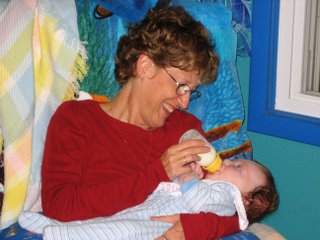 the mail with more clothes for her from Kyle's family. I think they might finally be done though because I can't think of a single other person who could possibly want to send her a gift! The mailman has become quite friendly with us and loves to talk to Hannah each time he delivers a package :) He's gotten friendly with the dogs too since they bark like crazy and barrel to the door every time he rings the doorbell!

Hannah's latest accomplishments are adding even more sounds to her vocabulary and turning into a chatty Cathy. All you have to do is look her in the eye and she starts gabbing away. All she really wants is an excuse to talk. A few days ago I wandered into the nursery to find Kyle singing to her and Hannah was singing right along! They were so cute :) She has a front carrier now and she likes it quite a bit. She's been helping me dust and run the sweeper that way. If I run the sweeper while she is napping in her crib she wakes up and screams, but if she rides in the carrier while I sweep she sleeps through the whole thing! Bizzare! Her head is getting really steady now and last night she was laying reclined on my knees and actually tried to sit up to get a toy. She managed to lift her head and shoulders off of my knees all by herself. She

seemed quite frustrated that she couldn't get all the way up. She really wanted that monkey rattle. All of a sudden she has become much more interested in toys and she definitely has her favorites. Right now her most favorite seems to be a monkey rattle she got from her Aunt Tina on Sunday. There are 3 colored monkeys hanging from a banana. For some reason she loves that toy and even has a favorite monkey out of the 3! The green monkey right now is the tops. Who'd have known! She's also settled into a nap routine which is nice. Each day at around 10:00 and 2:00 she starts to fuss and if I

rock her right then she falls asleep within 5 minutes. That has made getting things done a bit easier. It's nice that she's such a schedule oriented baby. I LOVE schedules :) Well, I think that's all I have to report at the moment. Oh, one more thing. I'm going to try to post Hannah's one month picture we had professionally taken at Target. It's not the best photo ever and the experience was harrowing (let's just say we won't be going back there), but we got the photos anyway. Enjoy!
Posted by Mama at 9:20 AM