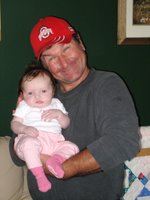 Well Hannah got to meet her Grandpa Barney on Sunday for the first time. He says he wants to be called Pap which is fine with us. He and Mindy brought Hannah an Ohio State blanket. Barney is trying to train her early I guess! Hannah is finally starting to get back to normal after her shots. This morning she didn't have a fever which made my day. Fortunately for me, when she did have a fever she loved the baby Tylenol. I don't know what I would have done on Saturday trying to give her medicine for the first time all by myself if she hadn't of liked it. It was stressful enough as it was. I sure didn't need her spitting it out or gagging! 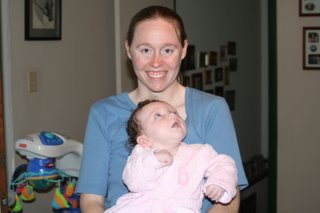 Hannah is getting so much stronger every day that it's unbelievable. She's able to sit upright for much longer periods with only the boppy pillow for support (it comes up just past her pants when she's sitting) and actually seems to prefer sitting upright as opposed to laying down. Sometimes she gets fussy if I get tired of helping her sit up and lay her down if she's not ready to be done looking at things! Tummy time is also getting more fun. Yesterday she had tummy time in her play gym and actually reached out in front of her for the toys that were hanging from the wedge. Today when I put her down for tummy time she immediately pushed up on her forearms and lifted her head and chest right off the floor and held it there for 4 minutes! I checked the clock! 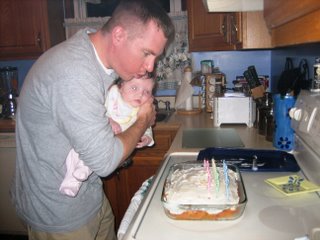 While up there she looked around, smiled at me, cooed, and tracked toys I was moving around with her entire head! I was so proud of her! :) She's also trying to sit up on her own now when she's in a reclined position and reach for toys that are held in front of her. Today I had her propped up on our bed with some pillows while I folded clothes and she tried to sit up with so much force that she got her head, shoulders, and upper back up off the pillows several inches and held it there for a few seconds before falling back against the pillows. Then she got the idea to use the pillows kind of like her bouncer and then starting trying to bounce her way up! Later on in the day she did the same thing while in her bouncer! I don't think it will be long before she's sitting up. The one thing she is not doing yet that I fully expected her to already have mastered is rolling over. From the time we brought her home from Wishard she has been able to roll herself up onto her side and stay there, but she still hasn't even really attempted (not that I've noticed anyway) to try to roll herself from her back to her belly or from her belly to her back. I can't wait for this stage to start though. It should be fun. 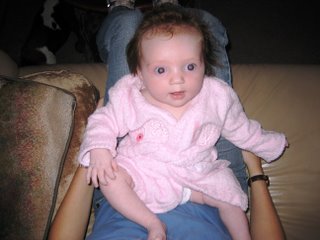 Another funny thing we have noticed about her personality is that although she loves her baths, she hates getting out and getting dressed afterwards. Well, she got a baby bathrobe at one of her showers and Kyle has discovered that if we can get her into that bathrobe as soon as she is out of the tub we can (as Kyle puts it) ride the happy wave for a bit longer. It's a bit of a pain to get a wet, slippery baby into the sleeves of the robe, but it's well worth the effort. The payoff is continued giggles and smiles instead of 15 or more minutes of screaming. Then once she's all dried and has forgotten about the bath, we can put her real clothes on her without a fight. Plus, she does look awfully adorable in the robe. Now all she needs is pink fuzzy slippers to go with it and some curlers for her hair. Her great grandma was saying on Saturday that she has enough hair to get a perm! :)

Well, that's all the Hannah updates I have for today. I'm going to try to post some pictures of her visit with Barney and Mindy and a cute picture I have of her in her bathrobe.
Posted by Mama at 1:03 PM