The Case of the Missing Baby Stuff 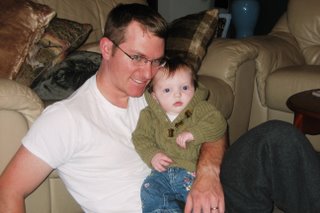 I remember someone telling me before Hannah was born that baby stuff is lost easily so I should buy extra, but I didn't really believe them. I now admit that I was wrong and they are (whoever it was) completely right. Recently things have bee disappearing like crazy! Half the fleet of Hannah's pacifiers have deserted their posts, her baby nail clippers are AWOL, and somewhere there are at least 3 missing baby socks! Add to this list the bottle we left at a restaurant the other day and several toy "links" that I am positive are here in the house somewhere and you get a recipe for driving me crazy! If things are bad now, I can only imagine how they will get once Hannah becomes mobile! 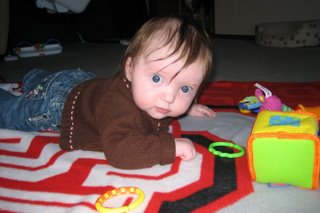 Lately Hannah has been having a bit of a rocky sleep schedule. Now most parents would probably wonder why I even worry, but Hannah is such a good sleeper and thrives so much on her schedule that I always worry when things get a little off. She's been falling asleep earlier and earlier in the evening and we had been having to wake her for her final bottle and diaper change before bed. Then after her last bottle she's been having a hard time settling down to sleep and has been crying when we put her down to sleep or waking up after a few minutes and crying until we rock her back to sleep. So, last night we decided to try giving her her last bottle a half an hour earlier and trying to keep her awake just a little bit longer so that she's really sleepy when we put her to bed. It seemed to work last night so hopefully it wasn't just a fluke and things will continue to run smoothly. 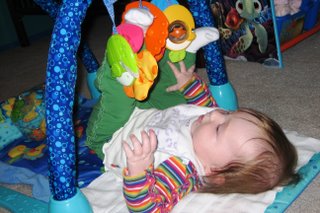 Hannah continues to enjoy her play gym more and more. Lately she's been getting a kick out of (no pun intended) swinging her legs up and grabbing her feet and then using them both together to kick the toys. It's pretty cute to watch. She continues to grow stronger and stronger and her head and trunk control has improved drastically in the last week. She's sitting up much better with her boppy and can sit by herself propped up against the back of the couch or a chair almost indefinitely.

Her hair is growing so long that it's almost ridiculous. It's constantly getting caught in the Velcro on her bibs or snaps on her shirt. Her bangs are now officially in her eyes and she appears to have a mullet! I've noticed that it seems like it is getting thicker as well. It's still not quite long enough everywhere for me to get it up into one of those Pebbles Flintstone pony tails, but it is definitely long enough for barrettes. The problem with that is that Hannah likes to play with her hair so much that she pulls the barrettes right out and I"m afraid she will put them into her mouth and choke.

Yesterday we had our first baby spit up incident in public. Kyle and I were out to eat and Hannah had finished her bottle and was sitting happily on my lap while I ate. Out of the blue I felt my pants getting wet. Hannah had spit up a massive amount of her bottle. She managed to not get a single drop of it on her bib, but instead deposited it all on both of our blue jeans! YUCK! I hate wet jeans. Of course I had an extra shirt for myself in the diaper bag should something like this ever happen, but not an extra pair of pants! Really, what were the odds that I'd get baby puke on my pants and not my shirt? Hannah sure does like to keep us on our toes! 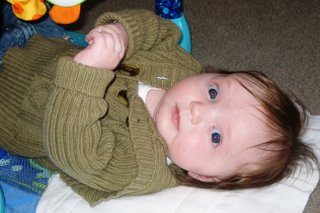 Of course she is still growing like crazy! We think she's grown another 1/4 inch and is now at 25 1/2 inches long. We don't know how much she weighs, but it's getting harder and harder to carry her around in her infant car seat and we've removed all of the head supports now because she is just too big. The other day Kyle noticed that most of her 0-3 month onesies, stretchy as they are, are getting too tight and difficult to snap. I've also had to retire 2 more 3-6 month sleepers (the more stretchy ones) in the past week. The other thing I have noticed is that her arms are getting longer. She has several 0-3 month and 3-6 month long sleeved onesies (which I absolutely love by the way!) that although they aren't too tight and will still snap are turning into 3/4 sleeved onesies instead of long sleeved! Right now I"m still having her wear them and I just layer something over the top of them since she really doesn't have many 6-9 month or 12 month long sleeved onesies, but soon I'm not going to be able to do even that because the arms are also getting tight. Unfortunately, I haven't been able to find many long sleeved onesies. Occasionally I'll find a single one at a specialty store like Old Navy or The Children's Place, but I haven't found any packs of them yet. I don't really want to buy them one at a time b/c they cost more that 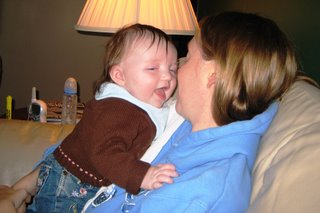 way, but I may have to start since companies don't seem to want to package them. It seems like everywhere wants to just sell long sleeved shirts. I have nothing against long sleeved shirts, but I really like the long sleeved onesies because they don't ride up when I pick Hannah up or when she wiggles around. As cold as it's been I want to make sure she stays as warm as possible.

Here are some more Hananh videos. Just click on the links to watch them.

Nat, I have no idea where you find the time to post all these pictures and videos! I love to come to your baby blog because there's usually something new!! Hannah's gorgeous and growing like a weed. Keep the pics coming.... Love Leah

hehehe yeah for old navy clothes! omg the 6-12 month outfit that Billie got her looks like it fits perfect!