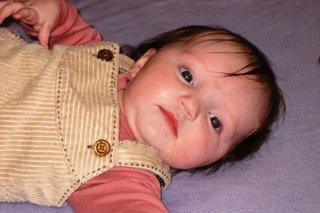 It's official. Hannah is now legally a Spontak! :) We went to court yesterday for Hannah's adoption finalization. While the hearing itself was uneventful actually getting up to the courtroom had some snags. We had to go through a very long security line to even get past the courthouse lobby. We had to take Hannah out of her stroller and send everything expect us and the stroller through the x-ray machine. They used the wand on the stroller. Once through they told us that cameras were not allowed and that we would have to take it back to the car. I was already just a little bit emotionally on edge and telling me that I was not going to get a picture to commemorate my daughter's finalization was not a smart thing to do! I marched right over to the deputy on guard with our letter from our lawyer who does adoption hearings in that very same courthouse all the time that said be sure to bring your camera. The deputy was not sympathetic at all and refused to let us bring it through! I was seriously ticked off because I HAVE SEEN pictures from that courthouse before. Kyle had to take the camera back to the car and then go through the long security line again. Once we got up to the courtrooms we met another couple who had also been denied their camera. Then, right before it was our turn to go into the courtroom another couple arrived from our agency and we found out that they HAD been allowed to bring their camera! Let me just say that this angered me even more than not being allowed to bring ours in. I mean if you are so adamant about security and about cameras being absolutely not allowed anywhere in the courthouse then how could they let someone get 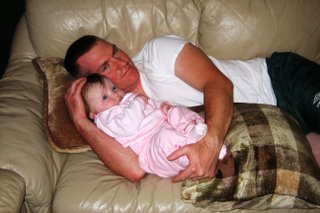 through with a really big camera!?! Some great quality control they have if security didn't even notice their camera! Thankfully that family was finalizing right after us and they offered to take our picture of us with the judge and email us the photos. So, I will have my picture, but I am still upset about the injustice of it all. If they are going to ban cameras then they need to ban all cameras and not just randomly refuse to let some in but not others. If the government wants to make rules then they should make them fair and applicable to all and not just enforce them when they feel like it. Anyway, the hearing went smoothly and it is all over. Hannah is now officially and legally a Spontak. :)

The last week or so has brought several new developments besides Hannah's finalization. First off, she is of course growing again. After mourning the retirement of two more beloved sleepers, we measured her again to find that she had grown another 1/4 to 1/2 inch. That puts her length now at around 25 3/4 inches or 26 inches! I 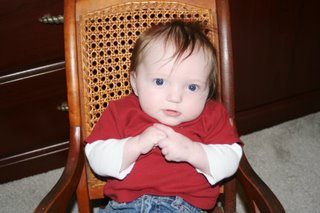 would say that she is now in 6-9 month clothes as her primary size. She still has a few odd 3-6 month onesies that fit, but they are getting tight. We removed the head support from her car seat last week, but yesterday Kyle had to actually move the harnesses in her car seat so that the shoulder straps would actually go around her. We got out the owners manual to the car seat and according to that Hannah can only grow another 1/4 to 1/2 inch or gain a few more pounds before she is out of the seat for good. I've been saying for about a month now that I thought she was getting close to outgrowing it, but Kyle kept dismissing me. Well, now we know for sure! I'm not quite ready to fork out the money for a new convertible car seat just yet, but I guess we really don't have much choice. Once she outgrows it, it's not safe to have her in it anymore. Safety is the most important thing so I guess I'll just have to deal with it. While at the courthouse I was able to compare Hannah to several other babies around her same age and she was by far the biggest one there. There was also an eight month old little boy at the restaurant we stopped for lunch at and Hannah was even bigger than him! I have concluded that my daughter is indeed a giant! I really hope she does not get teased by other kids once she gets older if this trend continues.

Hannah has also taught herself a new trick recently. She has learned how to use her head as a pivot point, arch her back and use her feet to push herself around in a circle. Last night I watched her do a complete 360 degree rotation. Mind you this took almost an hour to complete, but she did it. It also solves the mystery of how Hannah was managing to get herself completely perpendicular in her crib. Instead of staying in her crib the long way like we put her down we have been finding Hannah sleeping with her head and feet across the short side of the crib instead. I was really wondering how she was managing to do that when finally I got to see her scoot herself around. She has also decided that she no longer wants to sleep on her back no matter what Mom 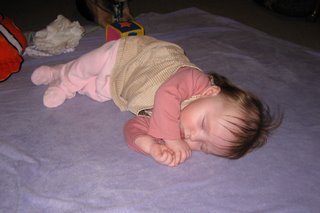 and Dad and all the experts say. She is going to sleep on her left side and there is nothing we or anyone else can do about it short of tying her down to the bed! She and Kyle have been involved in a battle of the wills the past few nights about this newest development and I must admit that Hannah is winning! Kyle places Hannah on her back to sleep and then several times a night goes in and makes her return to her back, but each time she immediately rolls herself back onto her side and drapes her arm across her face. It's the arm draping that worries Kyle the most I think. He's afraid she won't be able to breathe. It really doesn't matter what he does. No matter how she looks when we leave her she is always in her new preferred position when we come back. I guess this means goodbye to our beloved Super Buddha pose. :(

Hannah has also decided that she's not nearly as hungry as she used to be. She's started refusing bottles lately. Usually she takes some of each bottle, but there have been a few times in the last week that she has ended up taking over one whole bottle less of formula a day than is normal. I'm mildly concerned about this and plan to ask the doctor about it during her 4 month check up here in a few weeks, but I'm not concerned enough to call 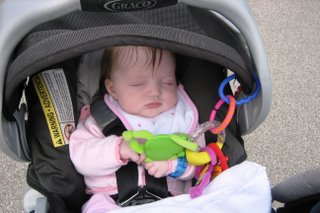 the office about it right now since other than that she seems perfectly OK. She's not losing weight that we can tell and not acting sick or running a fever. She just drinks until she's full and then spits the bottle out. If we try to put the nipple back into to her mouth she expertly blocks it with her hands or even reaches up and knocks it away if we manage to get past her defenses!

Another milestone is that Hannah has graduated to her big girl bathtub and she really enjoys it I think. I took the sling out of her tub and put it away for good. Now she's splashing away in the water with her feet. It's pretty cute. I've got some cute video of her splashing in the tub that I'll try to post. I'd rate it PG for some partial baby nudity! ;0
http://video.google.com/videouploadfinished?docid=5730186296407061204&filename=wsb64__00000_T2N0b2JlciAxOCwgMjAwNiAwMjk.avi
Just click on the link to watch the video.

On a final note, Hannah got yet another package in the mail the other day. Each time I think there can't 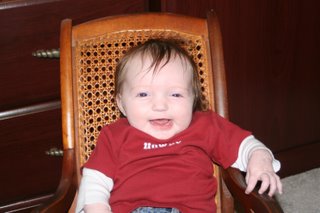 possibly be another person who might want to send a gift and each time I'm surprised when another package arrives in the mail! This time it was from my cousin Matt and his wife Regina. The mailman brought it into the house for me because my hands were pretty full with Hannah and it was a big box and after he got a look at Hannah he commented that he thought it looked like Hannah had grown since the last package he delivered for her last week! It's pretty bad when even the mailman is noticing growth! But then I guess it just goes to show what generous family and friends we have that Hannah has gotten enough packages that he has actually been able to track her growth over his many visits!
Posted by Mama at 10:32 AM

Hehehe I love the Howdy Shirt w/the long sleeved shirt under it! She's a little hick now! Yes! *runs to sorth through the res of her clothes*