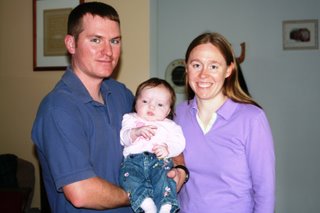 Tomorrow Hannah will officially be 3 months old. She is getting to be such a big girl! She is so curious and happy. She brightens my every day! Today she had breakfast with her friend Evelyn at Panearas and then went to JC Pennys to get her 3 month pictures taken. Of course she looked adorable and I can't wait to get them back so that I can post them on here.

Hannah has accomplished quite a bit since I last posted. Her biggest thing is that now toys are VERY interesting. She swats at them with her hands and kicks at them with her feet when they are dangled above her. She reaches for and grabs toys that are held in front of her on the first try and plays with and chews on them for quite awhile before she loses interest. She LOVES her play gym now and will play in it happily by

herself for over a half hour! The other day she was kicking at the ball on her gym and she kicked so hard it came off its velcro strap and flew across the room. I have some video of her in her play gym that I will try to post on here in the next week. She's decided lately that games are quite fun and enjoys playing patty-cake and peak-a-boo with both Mom and Dad. Rolling over is another skill that she is working hard to master. I've had several people tell me 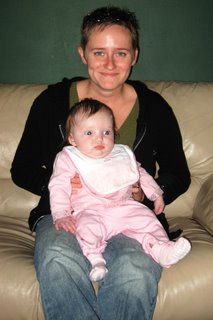 that she won't do it for quite awhile yet, but they haven't seen her at it. She's so close she can taste it and it frustrates her to no end. Apparently going from your tummy to your back is easier, but she has no interest at all in learning how to do that. She wants to roll from her back to her tummy and she's almost done it multiple times now. She gets about 3/4 of the way over and teeters there for a minute before her heavy legs get the better of her and she flops back over! It's quite comical to watch, but as I said if you leave her at it too long she gets REALLY MAD! The struggle for tummy time is over and now I actually think she enjoys it. She's also doing much better at sitting up although she'll still fall over if she gets too excited and turns her head too fast.

Hannah and Kyle teamed up together this year for my birthday present. They made me a really cool book titled Mommy and Me that has a little story and a bunch of pictures of Hannah and I. I loved it! It made me cry it was so sweet!

The other day I got the notion to play dress up with Hannah to see if she had grown into any new clothes (and she had!) and while I was at it I decided to try her Squirt Halloween costume on her. For those of you who don't know, before Hannah was born and actually before we were even matched with Tiffany and Mike, an extremely nice woman who adopted her son through the same agency that we adopted Hannah through was looking at our website and saw the pictures I had posted of our nursery. Since we had a Finding Nemo theme, she mailed me the Squirt costume that her son wore for Halloween last year. She was so sweet! I offered to buy it from her or at the very least pay the postage, but she wouldn't let me. She said she just wanted pictures of Hannah in the costume in her nursery. Well, the costume is a 12 month size and is quite large. Anyway, I 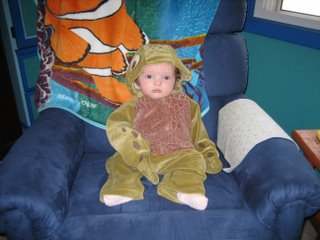 wanted to see just how big on Hannah it was since she is growing so quickly and has been able to wear some things that we were sure she wouldn't be in for another 6 months at least. By the time I got around to the costume Hannah was starting to get tired of being dressed and undressed, but she was a good sport about it and let me dress her up one more time. I managed to snap a few shots of her in the costume, but it is quite apparent from the photos that although she isn't screaming she is definitely not happy with the situation. To make things worse, I got a little greedy and decided that I wanted a picture of her doing tummy time in the outfit that way I could see the turtle's shell and eyes. Well that was just too much for poor Hannah and she let me have it. Such a screaming fit I had never been able to capture on film before. I just couldn't resist taking one final picture of her! I'm such a mean mom! :P

Tomorrow we are taking Hannah on her first overnight trip and hotel stay. We are going to Terre Haute for Rose Hulman's homecoming. I have absolutely no idea what and how much to pack for her. There's just no way to average or guess how many diapers or outfits she might go through in a day and a half. Some days she has 6 dirty diapers (one for each feeding), but others she has 12! Sometimes she dirties 3 or more before I 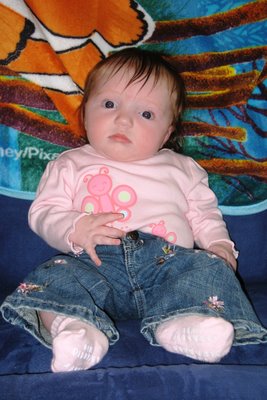 even get her off the changing table for the first one! The same goes for outfits. It seems like most days she makes it through the day in the same outfit that I put on her when she wakes up and then has one sleeper as PJs for the night, but other days she may go through 4 or more outfits during the day and 2-3 sleepers in the evening/night. The record (not counting the 2 weeks she was in the hospital) is 8 outfits and 2 sleepers in one 24 hour period! Thankfully that doesn't happen often, but it is a possibility and I don't want to be stuck with no clean clothes for my little girl. This trip is going to be a test run for our trip back to PA for Thanksgiving. We will be gone 9 days and it's practically impossible to know how many outfits, diapers, wash cloths, wipes, formula, burp cloths, etc to take with us. We could fill our entire car just with Hannah's stuff for the week, but of course we have to leave room for Kyle and I to sit and a small place to store our luggage as well! It should be an interesting adventure. What might normally be a 12 hour drive will most likely take closer to 18 and we will be without our bouncer, mobile, and swing which we have come to rely on as our saviors. We will also have to most likely have to boil bottles everyday and do laundry at least once during the trip at various people's homes that haven't had babies around in years. Like I said it should be interesting and will definitely be one for the memory books I imagine.

Just a few more Hannah updates before I wrap this post up. Thursday Hannah received yet another package in the mail. I honestly didn't think there was anyone left that could possibly send her a gift, but I was wrong. Hannah is totally spoiled rotten! We have recieved more packages in the mail in the 3 months since Hannah's birth than I have recieved my entire life! We know so many wonderful and generous people. Thank you all! This time it was Jay and Leah, our friends who recently moved back to Canada, who sent her a book called Hannah and the Seven Dresses. It is quite cute and I'm sure it will become a favorite of hers since what little girl doesn't like being the star of a book. It's very exciting as a little kid to hear your name read as part of a story. I remember my mom having some books made with me and my cousin Billie Jo as the main characters and I LOVED them. Thanks Jay and Leah!

Backing up just a little big further, Wednesday morning I woke up at around 5:00 am to the sound of Kyle and Hannah singing in the nursery. They were belting out Clemintine and various other kids songs as loud as they could. First, I just turned off the baby monitor hoping that would do the trick. When it didn't, I had to resort to putting my pillow over my head to get back to sleep. Now, don't get me wrong, I'm not really complaining. I know how incredibly lucky I am to have a husband who gets up at 5:00 am to feed the baby and who will sing silly songs to her before he has to go to work, but it is very hard to get to sleep listening to a song about a miners daughter who drowns because her lover is too scared to swim out and save her and whose father then goes into a depression and kills himself to be with her and then they both end up fertilizing flowers while the lover runs off with the sister! And this is a children's song! That brings me to another point. Have you ever actually listened to and thought about the words to the classic children's songs? They are awful. There are songs about jilted lovers, suicide, drunken monkeys, death, vomit, and other gross bodily functions. Whoever first decided these songs ought to be sung to impressionable children must have been crazy! If you don't believe me, go to http://niehs.nih.gov/kids/music.htm#index and read the lyrics to some of your favorites and some you remember listening to as a kid and I'm sure you begin to see the pattern.
Posted by Mama at 1:25 PM