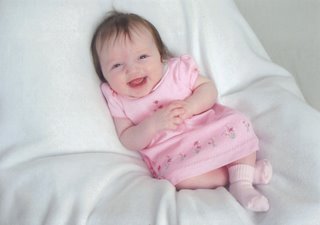 Hannah learned a new trick this past weekend which she is happily practicing constantly now! She can now blow raspberries. Her Daddy taught her this trick :) She sticks her tongue out and blows and sends spit flying everywhere. She thinks it is great fun. I on the otherhand have been washing bibs like crazy ever since she started. As if she wasn't drooling through bibs fast enough already, the raspberries have caused even more bibs to bite the dust. Today we've had 7 bibs already and it's only 2:00! I've got some video of her blowing her raspberries, but it isn't as cute as she really is. It seems that lately once we get the camera out she is much more interested in the camera than in doing whatever she was doing that we thought was so cute that it needed to be preserved on film! Just click on the link to see the video. http://video.google.com/videoplay?docid=7312079990026418993&hl=en 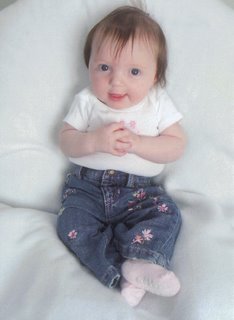 Another cool thing Hannah has started doing that is related to learning to blow her raspberries is that she is mimicking things we do now. Yesterday I was counting on my fingers to tell her how many more minutes she had to sit up after eating before she could get down and play and she started copying my finger motions almost exactly! She also started making the same facial expressions as I do. If I smile, she smiles. If I wrinkle my forehead, she does it too. It's very cute.

Kyle finally conceeded and admitted defeat in two long fought battles the other day. Hannah is now allowed to sleep on her side if she wants to and I am now allowed to trim Hannah's bangs! Her hair was getting so long that her bangs were in her eyes. The back of her hair looks like a baby mullet, but I don't plan to cut that. We'll just have to see it through to the end while it grows out, but the bangs just had to be trimmed. Kyle finally admitted that they should be cut before her next pictures. :) 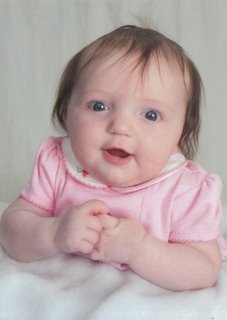 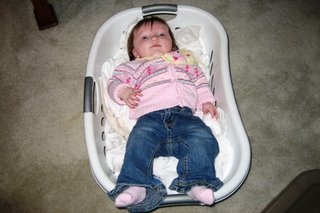 Finally, I've found a new way to get my chores done faster while still entertaining Hannah. The other day I sat her down inside an empty laundry basket while I transferred clothes from the washer to the dryer and it worked perfectly for keeping her off the dirty basement floor and it gave her some practice on sitting up. Then, later in the day I didn't want to make two trips up and down the basement stairs so I put 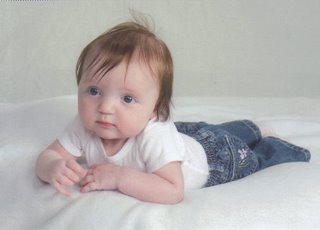 Hannah in the laundry basket with the clean clothes and brought her upstairs inside the basket. She got a big kick out of that and lounged around in it for quite some time even after we were upstairs! I managed to get a picture of her with the clean clothes that I will try to post on here. I'll also post Hannah's official 3 month pictures. I think they turned out pretty cute if I don't say so myself.